The Girl in the Clockwork Collar by Kady Cross 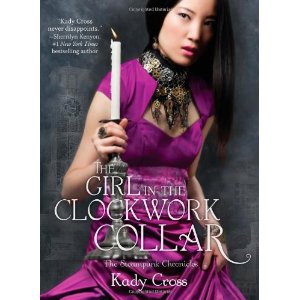 I read this book for my Get Steampunk'd 2013 Challenge.  This book is the second in The Steampunk Chronicles.  You can read an excerpt here.  Kady Cross is a pseudonym for Kathryn Smith, a romance writer.

The Story: Jasper Renn has been taken from London by police from America. They say he is wanted for murder.  Finley, Griffin, Sam and Emily chase after him.   They fly to America in Griffin's new dirigible.  While staying at the Waldorf Astoria, they find out that Jasper was kidnapped by Dalton, the head of a gang in the Five Points section of Manhattan.  Jasper had stolen a device from Dalton several years ago.  Dalton wants it back or he will tighten the clockwork collar on Jasper's former girlfriend, Mei Xing. Finley and her friends find out what is going on and try to rescue Jasper from Dalton.

There are real people and places in this story like Nicola Tesla, Five Points, Gangs of New York and the Waldorf Astoria Hotel, which was torn down to build the Empire State Building.

This book was very good.  I will be reading the first one in the series as soon as it is avaible from the library!  If you like Cassandra Clare, you will like this series.

I've just got the third book as an advanced reader copy and it's the best of the lot, IMHO. Something to look forward to :)