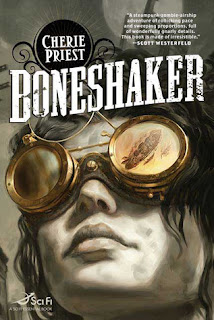 I had a hard time with this book at first because I kept getting interrupted while I was starting to read it. But I sequestered (hehehe) myself and really got into it!  I will be reading more by this author.

Levi Blue invented a machine, Boneshaker, to drill through ice to reach gold.  He tried it out in the basement of his home in Seattle.  Something went wrong and he released a poisonous gas that destroyed the city, turning people into zombies.  Sixteen years later, Briar, Levi's wife, must go into the walled part of the city to search for her son, Zeke, who is in search of answers about his father and grandfather, Briar's father.  Briar never told Zeke much about either men and is desperate to find her son in the horrible walled section of the city where zombies roam! She planned to enter the city under the wall, the way Zeke did but there was an earthquake which collapsed the tunnels.  So she searches for an airship to take her over the 200 ft walls.  This is where the adventure begins!

You can read an audio except here.

This book is for the Get Steampunk'd 2013 Challenge.