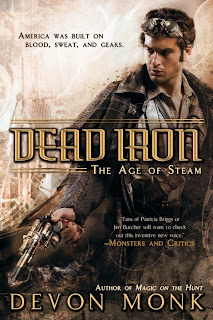 I really liked this book.  It's a combination of western/supernatural and steampunk.  Cedar Hunt is a hunter.  He is looking for a missing boy taken by a bogeyman.  He is also a werewolf.  He encounters a witch and other fey.  They come together to save themselves and their town from a wicked man, Lord LeFel.

From amazon: Welcome to a new America that is built on blood, sweat, and gears...

In steam age America, men, monsters, machines, and magic battle for the same scrap of earth and sky. In this chaos, bounty hunter Cedar Hunt rides, cursed by lycanthropy and carrying the guilt of his brother's death. Then he's offered hope that his brother may yet survive. All he has to do is find the Holder: a powerful device created by mad devisers-and now in the hands of an ancient Strange who was banished to walk this Earth.

In a land shaped by magic, steam, and iron, where the only things a man can count on are his guns, gears, and grit, Cedar will have to depend on all three if he's going to save his brother and reclaim his soul once and for all..

Excerpt:
Cedar had stared straight into the killing eyes of rabid wolves, hungry bears, and charging bull elk, but Mrs. Horace Small had them all topped.
With dirt brown hair piled in a messy bun on the back of her head, and a pinch of anger between her brows, the storekeeper’s wife always seemed half a tick from blowing a spring.
“Two dollars,” she repeated, her fist stuck wrist-deep in the fabric at her hip, her jaw jutted out like a bass on a hook.
“Cornmeal, coffee, and a bit of cheese,” Cedar said mildly. He knew better than to let his anger show, especially this close to the full moon, in a store full of townsfolk eager to get their hands on the fresh supplies and gears from the old states. “Might be I’m missing something.” He looked back down at the receipt with Mrs. Small’s tight penmanship. “How again do they add to two dollars?”
He knew math—knew it very well. He’d spent four years back east in the universities and had plans of a teaching life. History and the gentle arts, not the wild metal and steam sciences of the devisers. He’d done his share of tinkering—had a knack for it—but not the restless drive of a true deviser who couldn’t be left in a room with a bit of rope, metal, and a hammer without putting them all together into some kind of engine or contraption.
No, his needs had been simple: a teacher’s life filled with a wife and a daughter, and his brother, Wil. But that life had been emptied out and scraped clean six years ago, when he’d been only twenty-two. Leaving him a changed man.
Leaving him a cursed man.
“It’s written plain enough,” she said. “You do read, Mr. Hunt?”
“The part there that says ‘fee,’” Cedar asked without looking up. “What fee is that?”
“The rail takes its due. You aren’t part of the railroad, Mr. Hunt. Not a farmer, miner, rancher, or deviser. Not a member of this good community. I’ve never seen you in church. Not one single Sunday the last two years. That fee for the rail is less than all those months’ dues you owe to God.”
“Didn’t know the collection plate took hold to my provisions,” he said with a little more irritation than he’d intended, “and I don’t recall offering my wages to the rail.”
The mood in the general store shifted. The men in the shop—the three Madder brothers, dark haired, dark eyed, all of them short, bull-shouldered, and strong—were listening in. They’d stopped pawing and chuckling at the new metals and bits in the straw-padded crates, and were waiting. Waiting for him to say the wrong thing. Waiting for a fight.   For more click here.