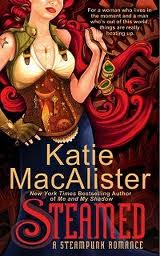 I read this for the 2013 Get Steampunk'd Challenge.

I really enjoyed this book.  It was a bit different than the usual steampunk books.  Jack and his sister, Hallie "get zapped' into another dimension.  Same time, same year but different. The world is steampunk. Electricity is dangerous. The world is at war.  Some of the countries are the same and some not. Jack and Hallie land on an airship captained by Octavia Pye. Jack and Octavia fall in love. Hallie gets kidnapped.  What an adventure.
I am hoping that there will be another book coming soon.  Katie MacAlister has written a bunch of books!!

An Excerpt:
A Plague on Sisters
"Good morning, Jack. Is that a molecular detector in your pocket, or are you just happy to see me?"
The voice that called out as I passed was female, soft, and sultry as hell. I paused to toss a grin at one of the two women who were occupying the big kidney-shaped desk that graced the front lobby of the Nordic Tech building. "Morning, Karin. Would it be against human resources policy if I was to tell you how much I liked that top?"
The red-haired receptionist giggled and leaned forward, giving me a better-than-normal view of her cleavage in the skimpy tank top that she liked to wear on casual-dress Fridays. "Probably, but I'm not going to tell anyone. You know my rule, Jack."
"What happens in reception stays in reception?" I asked, winking.
She giggled again. "You're so naughty. You look really yummy yourself in khaki. Is that the new Airship Pirates shirt?"
"It is. Saw them last night at the Foundry," I answered, naming a local hot spot favored by bands that were a bit out of the mainstream. I turned around so she could admire the design on the back of the T-shirt.
"Oh, and I was hoping you would ask me to go see them," she said, pouting just a little, and leaning over a bit farther. She traced a finger down my arm as I turned back to face her. "We had such fun the last time we went out. Well, until I got sick and had to go home, but I just know we would have fun again."
She paused, clearly waiting for me to do my duty and ask her out again, but the memory of her lying in a drunken stupor in the back of my car—not to mention the money I had to pay to have the vomit cleaned up and the car deodorized—was enough to warn me against any such thing.
That wasn't the Jack Fletcher she wanted, however. It was the fake Jack she was appealing to, the fictional Jack who had somehow garnered a reputation as a wild ladies' man. I did what was expected and slapped a quasi leer onto my face as I leaned in close. "You know I would snap you up in a minute if it wasn't for your boyfriend."
"Oh, him," she simpered, brushing my hand with her fingers. "Jerry's jealous of everyone." Read more here.