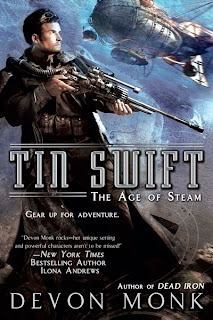 This is the second book in the Age of Steam Series. We are back with Cedar, Wil the Wolf, Rose, Mae and the Madden Brothers right where the first book ended.  They are trying to make their way to Kansas so Mae can break her ties with the coven because they are slowing driving her mad with their "come home" spells.  The group needs supplies and they enter the town of Vicinity. Right away Cedar notices the Strange.  All people are dead.  Rose convinces them to bury the bodies.  Cedar hears a child crying and enters a house. Rose is right behind him.  The child is a bomb and explodes. Rose gets hit with a tiny key that quickly embeds into her.  It is part of the holder.  All of a sudden the dead come to life and try to kill the group.  They hear something in the sky.  An Airship!  They are saved.  Everyone escapes to the ship except for the Maddens.  They meet up later and continue their search for pieces of the Holder.
This book has two storylines going: the group and the people on the airship.

Excerpt:
Stump Station wasn’t much more than a collection of shacks built precariously into the pockets and wedges on the east side of the Bitterroot Range in the Idaho Territory. So barren and out of the way, even the vultures risked starvation.
It was the perfect sort of place to attract those members of society who preferred to remain unnoticed by others. Hard men and rangy women who spent most of their days waiting for the right wind to carry them up to the glim grounds where they could harvest their fortune.
Glim, more precious than diamonds or gold, used to power ships on air, water, or land. Used to heal the sick, cure the blights, turn the tide in wars, and make anything and everything stronger and longer-lasting. Glim was even rumored to extend a man’s life well beyond his years.
Rare and desired, glim. And as hard to locate as Hades’ back door.
Some said glim could be found underground, or out at sea. But the only place glim was known to occur with any regularity was above high mountain ranges, and up higher still. Above the storm clouds, floating like nets of soft lightning, the glim fields were capricious and fleeting. Difficult to find. Deadly to harvest. Most ships couldn’t launch that high, last those storms, or lash and land without killing those who flew them.
So it was no wonder glim fetched a pretty price in the legitimate markets, and a king’s ransom in those markets less savory.
Captain Hink counted himself among his own kind out here in the rocks. Outlaws, prospectors, glim pirates, soldiers of luck, fools, and the foolhardy, brothers all.  Read more here.