The Chosen by Theresa Meyers 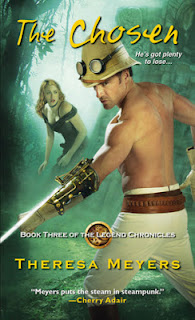 This is book three in the Legend Chronicles.  Somehow I missed book two!  Remington, the middle Jackson brother, is on a mission to find his piece of the Book.  China, a Darkin, is helping him. They meet a few interesting people and Darkin along the way and ride on a steam submarine down thru the Gulf of California almost to Guatemala!  They also ride an airship to Krakatoa.

From the author's site:

The Chosen: a prophecy older than dirt and more dangerous than death. Even as they perfected steam-powered gadgetry and rounded up varmints from Hell, the Jackson brothers didn't believe in it. But when the chips are down, three brothers named for weapons aren't going out without a fight...
A Walk On The Wild Side
Attorney by day, demon-hunter by night, Remington Jackson is used to being on the sunny side of the law, even in the Wild West. But it's showdown time, and Remy and his brothers are getting desperate. They don't have the relic they need to slam the door shut on evil—so Remy is going to have to find and steal part of it.
Enter China McGee, shapeshifter, thief, beauty, and current prisoner. When Remy offers her freedom in exchange for a little light-fingered help, she's pretty sure she's going to end the association with a good old-fashioned seductive double cross. But there's something about fighting through a jungle full of Mayan ruins that makes you want to settle down together. China could change. Remy might be special. But none of that matters if the devil takes them all...