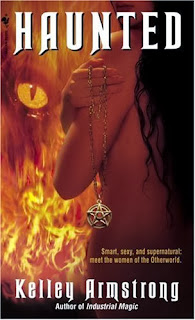 Eve is a ghost.  She is always watching her daughter, Savannah.  The Fates need her to capture a demon called the Nix that has been wreaking havoc throughout time.  She gets help from an angel and her daughter's father Kris.  They track her movements through time by watching the ghosts of the women she previously inhabited. This was an interesting story.  I liked how the author used some true stories and wrote her fiction with them.


From the author:
Eve Levine made a bargain with Fate, and now she’s come to collect, sending Eve off on a quest to retrieve the soul of an escaped demi-demon. Playing ghost world bounty hunter isn’t exactly what Eve had in mind for an afterlife career, but a deal is a deal. Eve never breaks a promise…even when the cost of repaying that debt turns out to be more than this ghost can afford.