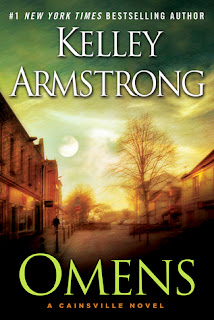 I forget how I found this book but I am glad. Olivia is about to be married but she's not sure if she really wants to marry James.  Especially after he tells her he wants a life in politics. Her mother calls her and says she has something important to tell her.  She goes home and find out that she is adopted and her biological parents are notorious serial killers.
She feels that her adoptive mother does not really want her anymore and she takes off and ends up in Cainsville.  She decides to meet her biological mother Pamela.  Olivia gets drawn into proving her parents did not kill the last two victims.  The story gets really exciting at this point.
This is the first Cainsville novel.  I want to know more about Cainsville!  Just what is going on here?

I don't know how to categorize this book.  Is it a paranormal or a thriller or a mystery?  All I know is I liked it and will read this author again!!

Synopsis from the author's site:
Twenty-four-year-old Olivia Taylor Jones has the perfect life. The only daughter of a wealthy, prominent Chicago family, she has an Ivy League education, pursues volunteerism and philanthropy, and is engaged to a handsome young tech firm CEO with political ambitions.
But Olivia’s world is shattered when she learns that she’s adopted. Her real parents? Todd and Pamela Larsen, notorious serial killers serving a life sentence. When the news brings a maelstrom of unwanted publicity to her adopted family and fiancé, Olivia decides to find out the truth about the Larsens.
Olivia ends up in the small town of Cainsville, Illinois, an old and cloistered community that takes a particular interest in both Olivia and her efforts to uncover her birth parents’ past.
Aided by her mother’s former lawyer, Gabriel Walsh, Olivia focuses on the Larsens’ last crime, the one her birth mother swears will prove their innocence. But as she and Gabriel start investigating the case, Olivia finds herself drawing on abilities that have remained hidden since her childhood, gifts that make her both a valuable addition to Cainsville and deeply vulnerable to unknown enemies. Because there are darker secrets behind her new home, and powers lurking in the shadows that have their own plans for her.

Eden crawled into the living room, the rough carpet burning her chubby knees and hands. As boots slapped the hall floor, she went still, holding her breath.
Had he heard her?
The footsteps stopped. She leaned back around the doorway and peeked down the dark hall. There was no sign of him. Not yet. But he’d come for her. He always did. She crept a little farther, resisting the urge to leap to her feet and run. He’d hear her if she ran.

Once she was past the big chair, she stopped and looked around. The long table in front of the sofa had a cupboard. She opened the door, wincing at the click. The space was big enough tosqueeze into, but it was full of books and magazines.

She glanced back at the big chair. It was too far from the wall. If she hid behind it, he’d see her as soon as he came around the corner. But the sofa? Yes! She flattened onto her stomach. Then she wriggled backward until her legs were all the way under and— Her bum hit the frame and stopped her. She tried again, squirming madly, but she couldn’t get under. Maybe if she went in headfirst. She tugged herself forward and—
She was stuck. She wiggled as hard as she could, the carpet burning her knees, but she
couldn’t get loose, and she was sure any moment now he’d—
She popped out. She took a second to catch her breath. Then she turned around to go in
headfirst and— Her head wouldn’t fit under, either.
What about behind the sofa? If she could move it out a little, she could get in there. She grabbed the leg with both hands and pulled. It wobbled but didn’t move.
The footsteps started again, slow and steady. Coming her way? She swallowed and tried to
listen, but her heart was pounding so hard she could barely hear.

She skittered from between the table and sofa and glanced at the hall leading to the
bedrooms. Lots of hiding places back there. Better hiding places. If she could—

She dove for the sofa and pushed it forward just enough so she could squish in behind. She tried to look back to make sure her feet were hidden, but she couldn’t tell. She wiggled in a little farther, and then she pressed her hands to her mouth. If she made any noise—any at all—he’d find her. She lay on the carpet, trying not to sniff the old cat pee as she made herself as small as possible.

Footsteps thudded into the room. And stopped. When Eden squeezed her eyes shut, she could hear the slight rasp of his breathing. She pictured him there, brushing his shaggy blond hair from his eyes as he scanned the empty room.

“Eden?” he called.
His boots swished on the carpet as he took a few more steps. He sucked in a breath. “She’s gone. Oh my God, Pammie, our baby’s gone!”

Eden pressed her fist into her mouth to stifle a laugh. Mommy’s soft sigh wafted from the kitchen as she told Daddy—again—not to use language like that in front of their daughter.
“But she’s disappeared!” he said. “Call the police! Call the fire department! Call the clown brigade!”
“Speaking of clowns . . .” her mother teased.
Eden’s body shook with silent giggles.