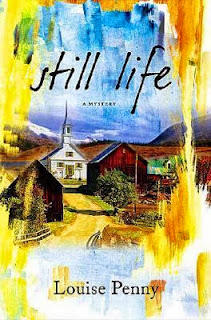 Jane Neal is found dead.  Is it murder or an unfortunate hunting accident?  Chief Inspector Armand Gamache and his team come to Three Pines to figure it out. We learn about the people in the town and their relationships to each other.  I really enjoyed this murder mystery. I did not figure out who the murderer was halfway through the book like a lot of other stories!

When I was researching I found out that a Canadian network made this book into a movie.  It was shown in September. I hope that it will be shown in the US.

From the author's site:

As the early morning mist clears on Thanksgiving Sunday, the homes of Three Pines come to life - all except one…
To locals, the village is a safe haven. So they are bewildered when a well-loved member of the community is found lying dead in the maple woods. Surely it was an accident - a hunter's arrow gone astray. Who could want Jane Neal dead?
In a long and distinguished career with the Sûreté du Quebec, Chief Inspector Armand Gamache has learned to look for snakes in Eden. Gamache knows something dark is lurking behind the white picket fences, and if he watches closely enough, Three Pines will begin to give up its secrets…

Excerpt:
Miss Jane Neal met her maker in the early morning mist of Thanksgiving Sunday. It was pretty much a surprise all round. Miss Neal's was not a natural death, unless you're of the belief everything happens as it's supposed to. If so, for her seventy-six years Jane Neal had been walking toward this final moment when death met her in the brilliant maple woods on the verge of the village of Three Pines. She'd fallen spread-eagled, as though making angels in the bright and brittle leaves.
Chief Inspector Armand Gamache of the Sûreté du Quebec knelt down; his knees cracking like the report of a hunter's rifle, his large, expressive hands hovering over the tiny circle of blood marring her fluffy cardigan, as though like a magician he could remove the wound and restore the woman. But he could not. That wasn't his gift. Fortunately for Gamache he had others. The scent of mothballs, his grandmother's perfume, met him halfway. Jane's gentle and kindly eyes stared as though surprised to see him.
He was surprised to see her. That was his little secret.Not that he'd ever seen her before. No. His little secret was that in his mid-fifties, at the height of a long and now apparently stalled career, violent death still surprised him. Which was odd, for the head of homicide, and perhaps one of the reasons he hadn't progressed further in the cynical world of the Sûreté. Gamache always hoped maybe someone had gotten it wrong, and there was no dead body. But there was no mistaking the increasingly rigid Miss Neal. Straightening up with the help of Inspector Beauvoir, he buttoned his lined Burberry against the October chill and wondered.

Jane Neal had also been late, but in a whole other sense, a few days earlier. She'd arranged to meet her dear friend and next-door neighbor Clara Morrow for coffee in the village bistro. Clara sat at the table by the window and waited. Patience was not her long suit. The mixture of café au lait and impatience was producing an exquisite vibration. Throbbing slightly, Clara stared out the mullioned window at the village green and the old homes and maple trees that circled the Commons. The trees, turning breathtaking shades of red and amber, were just about the only things that did change in this venerable village.
Framed by the mullions, she saw a pick-up truck drift down rue du Moulin into the village, a beautiful dappled doe draped languidly over its hood. Slowly the truck circled the Commons, halting villagers in mid-step. This was hunting season and hunting territory. But hunters like these were mostly from Montreal or other cities. They'd rent pickups and stalk the dirt roads at dawn and dusk like behemoths at feeding time, looking for deer. And when they spotted one they'd slither to a stop, step out of the truck and fire. Not all hunters were like that, Clara knew, but enough of them were. Those same hunters would strap the deer on to the hood of their truck and drive around thecountryside believing the dead animal on the vehicle somehow announced that great men had done this.
Every year the hunters shot cows and horses and family pets and each other. And, unbelievably, they sometimes shot themselves, perhaps in a psychotic episode where they mistook themselves for dinner. It was a wise person who knew that some hunters - not all, but some - found it challenging to distinguish a pine from a partridge from a person.
Clara wondered what had become of Jane. She was rarely late, so she could easily be forgiven. Clara found it easy to forgive most things in most people. Too easy, her husband Peter often warned. But Clara had her own little secret. She didn't really let go of everything. Most things, yes. But some she secretly held and hugged and would visit in moments when she needed to be comforted by the unkindness of others.
Croissant crumbs had tumbled on top of the Montreal Gazette left at her table. Between flakes Clara scanned the headlines: 'Parti Quebecois Vows to Hold Sovereignty Referendum', 'Drug Bust in Townships', 'Hikers Lost in Tremblant Park'.
Clara lifted her eyes from the morose headlines. She and Peter had long since stopped subscribing to the Montreal papers. Ignorance really was bliss. They preferred the local Williamsburg County News where they could read about Wayne's cow, or Guylaine's visiting grandchildren, or a quilt being auctioned for the seniors' home. Every now and then Clara wondered if they were copping out, running away from reality and responsibility. Then she realised she didn't care. Besides, she learned everything she really needed to survive right here at Olivier's Bistro, in the heart of Three Pines.
'You're a million miles away,' came the familiar and well-loved voice. There was Jane, out of breath and smiling, her laugh-lined face pink from the autumn chill and the brisk trot from her cottage across the village green.
'Sorry I'm late,' she whispered into Clara's ear as the two hugged, one tiny, plump and breathless, the other thirty years younger, slim, and still vibrating from the caffeine high. 'You're trembling,' said Jane, sitting down and ordering her own café au lait. 'I didn't know you cared so much.'
'Filthy old hag,' laughed Clara.
'I was this morning, that's for sure. Did you hear what happened?'
'No, what happened?' Clara leaned forward eager for the news. She and Peter had been in Montreal buying canvases and acrylics for their work. Both were artists. Peter, a success. Clara as yet was undiscovered and, most of her friends secretly felt, was likely to remain that way if she persisted in her unfathomable works. Clara had to admit her series of warrior uteruses were mostly lost on the buying public, though her household items with bouffant hair and huge feet had enjoyed a certain success. She'd sold one. The rest, roughly fifty of them, were in their basement, which looked a lot like Walt Disney's workshop.
'No,' whispered Clara a few minutes later, genuinely shocked. In the twenty-five years she'd lived in Three Pines she'd never, ever heard of a crime. The only reason doors were locked was to prevent neighbors from dropping off baskets of zucchini at harvest time. True, as the Gazette headline made clear, there was another crop that equaled zucchini in scope: marijuana. But those not involved tried to turn a blind eye.
Beyond that, there was no crime. No break-ins, no vandalism, no assaults. There weren't even any police in Three Pines. Every now and then Robert Lemieux with the local Sûreté would drive around the Commons, just to show the colors, but there was no need.
Until that morning.