Fall on Your Knees by Ann-Marie MacDonald 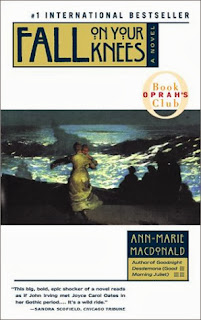 This is the story of one family from Cape Breton Island, Canada. the story starts with James' parents and ends with his grandchildren. The story spans almost one hundred years. Sometimes it is wonderful and sometimes it is very sad. The family makes it through both world wars and the depression. I enjoyed this book.  It was written extremely well. The characters were real.  Some of them you wanted to embrace and others you wanted to murder and sometimes both at once! This is the first Oprah book that I have enjoyed!

From goodreads:
They are the Pipers of Cape Breton Island -- a family steeped in lies and unspoken truths that reach out from the past, forever mindful of the tragic secret that could shatter the family to its foundations. Chronicling five generations of this eccentric clan, "Fall On Your Knees" follows four remarkable sisters whose lives are filled with driving ambition, inescapable family bonds, and forbidden love. Their experiences will take them from their stormswept homeland, across the battlefields of World War I, to the freedom and independence of Jazz-era New York City.
Compellingly written, running the literary gamut from menacingly dark to hilariously funny, this is an epic saga of one family's trials and triumphs in a world of sin, guilt, and redemption.