Now You See Her by Joy Fielding 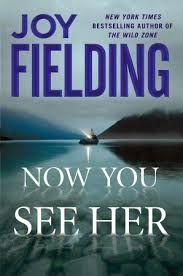 This is a story about loss.  Marcy Taggart's marriage has ended.  She had planned an anniversary trip for their 25th to Ireland.  She decides to go on the trip alone.  She is on a sight-seeing tour in Cork.  She thinks that she sees her daughter Devon who is missing for over two years. Marcy decides to search for her instead of going back home to Toronto.  We learn about her mother and daughter's battle with bi-polar disorder. This is very important to the story and how Marcy cannot accept the things that have happened.
During her search for Devon, Marcy over hears a one sided conversion about kidnapping a baby.  She goes to the police but they don't seem to believe her because of a few incidents that have happened while she has been in Cork. But a man intervenes.....you will need to read the book to find out how!

From Fielding's site:
When Marcy Taggart goes to Ireland after divorcing her husband of twenty-five years, a chance encounter catapults her entire life into turmoil. Years earlier, her daughter, Devon, disappeared in the icy waters of Georgian Bay after a canoeing accident, her body never recovered. But on a day trip to Cork, Marcy is certain she spots Devon walking down the street. When her daughter disappears into a crowd, Marcy begins a desperate search to find her - and to uncover the disturbing truth that might, in the end, be her only salvation. Exhilarating and engaging, this is Joy Fielding at her best - delivering a pulse-racing, tension-filled read.