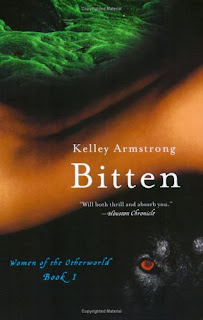 Elena is the only female werewolf.  She was not born but bitten. After years living with the pack, she leaves and starts life over again in Toronto.  She meets a man, Phillip, falls in love and moves him in her home. Life is good until Jeremy calls, "Come home", he says. Jeremy is the pack master in New York. Elena does not pick up the phone.  When she calls back later she gets no answer. She calls and calls and still gets no answer. Elena tells Phillip her cousins were in an accident and she needs to go to the US for a few days. She is very worried.  When she gets to Stonehaven, she finds out that a mutt - a non-Pack werewolf - is killing people in the area.  Elena is upset.  She thought it was something serious. Little does she know that it's about to become very serious!

I enjoyed this book.  It's the first book that Armstrong wrote and sometimes the reader can tell but I was caught up in the story pretty quick.  This book has been optioned and turned into a TV show that will air on Syfy on Monday, January 13th. Look at this.  I cannot wait to check out the man playing Clay, one of Elena's love interests.

Summary from the author's site:
Elena Michaels is the world’s only female werewolf. And she’s tired of it. Tired of a life spent hiding and protecting, a life where her most important job is hunting down rogue werewolves. Tired of a world that not only accepts the worst in her–her temper, her violence–but requires it. Worst of all, she realizes she’s growing content with that life, with being that person.
So she left the Pack and returned to Toronto where she’s trying to live as a human. When the Pack leader calls asking for her help fighting a sudden uprising, she only agrees because she owes him. Once this is over, she’ll be squared with the Pack and free to live life as a human. Which is what she wants. Really.