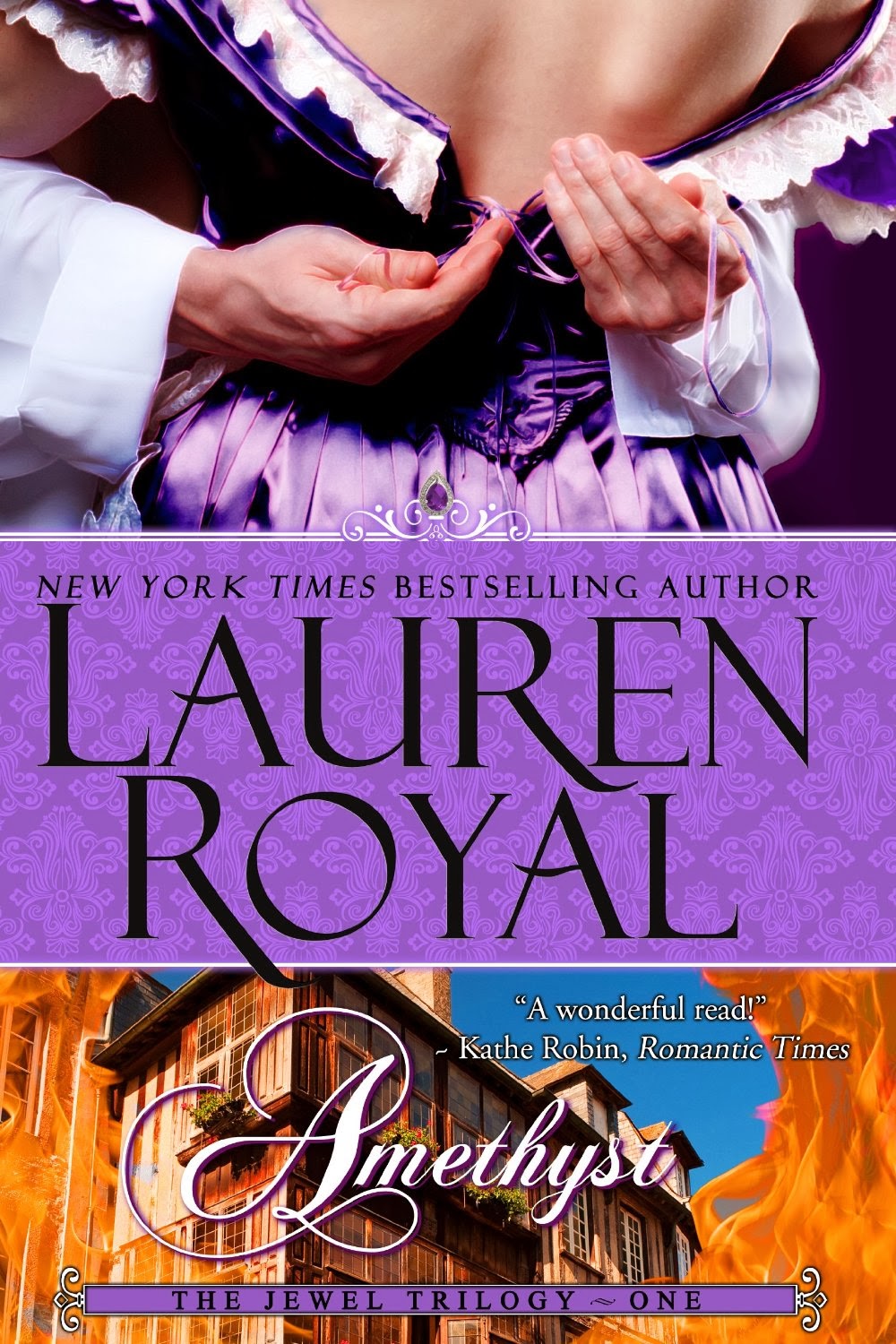 Amy is a jewelry maker.  She works for her father in their shop in London. She is betrothed to Robert.  Amy doesn't want to marry him. But her father is forcing her to. Thank goodness she has put it off for six months.
One day the King comes by their shop.  He is parading around London. After King Charles goes by them, she sees the most beautiful man. Who is he?  A few weeks later, the man comes into the shop with a woman.  Amy finds out that he is Colin Chase and the woman is his sister.  Amy is asked to make a signet ring for him.  He is dazzled by her but he is engaged to Priscilla and he is going to marry her.
A fire breaks out in London and Colin gets there quickly to help put out the fire. He rescues nine children and then comes upon Amy. Her father has gone back into the shop to get a picture of her mother. The roof falls in on him. Colin rescues Amy and her trunk.  Their attraction is just starting to build. Will they become a couple?

London, 1666
Amethyst Goldsmith makes dazzling jewelry, but her future isn’t nearly as bright as the pieces she creates. Though custom dictates she wed her father’s apprentice, her heart rebels against the match. In mere days Amy will be condemned to a stifling, loveless marriage, and she sees no way out—until the devastating fire of 1666 sweeps through London, and tragedy lands her in the arms of a dashing nobleman who knows a diamond in the rough when he sees it…
Colin Chase, the Earl of Greystone, has his future all figured out. He’s restoring his crumbling castle and estate to its former glory, and the key to its completion is his rich bride-to-be. But the Great Fire lays waste to his plans, saddling him with trouble—in the form of a lowly shopkeeper’s daughter with whom he’s most inconveniently falling in love…

Excerpt:
London
April 22, 1661
The last time Amethyst Goldsmith saw her king, she was five years old and he was about to have his head severed from his body. Now, twelve years later, she sincerely hoped his son would have better luck.
She shouldered her way through the crowd, her parents and aunt murmuring apologies in her wake. Here, there's room! Finally reaching a few bare inches of rail, she clasped it with both hands and turned to flash them a victorious smile. Come along, it's starting!
Hugh and Edith Goldsmith joined her, shaking their heads at their daughter's tenacity. Hugh's sister Elizabeth squeezed in behind. Ignoring the grumbling of displaced spectators, Amy spread her feet wide to save more room at the front. Robert, over here!
Robert Stanley tugged on her long black plait as he wedged himself in beside her. She shot him a grin; he was fun. Although he'd arrived just last week to train as her father's apprentice, Amy had known for years that she was to marry him. So far they'd gotten along fine, although he'd been surprised to find she was far more skilled as a jeweler than he. Surprised and none too pleased, Amy suspected. But he would get over those feelings.
She might be female, but her talent was a God-given gift, and she'd never in this lifetime give up her craft. Robert would have to learn to accept that.
With a sigh of pleasure, Amy shuffled her shoes on the scrubbed cobblestones. Look, Mama! Everything is so clean and glorious. She breathed deep of the fresh air, blinking against the bright sun. The rain has stopped…even the weather is welcoming the monarchy back to England! Have you ever seen so many people? All London must be here.
These cannot all be Londoners. Her mother waved a hand, encompassing the crowds on the rooftops, the mobbed windows and overflowing balconies. I think many have come in from the countryside.
A handful of tossed rose petals drifted down, landing on Amy's dark head like scented snowflakes. She shook them off, laughing. Just look at all the tapestries and banners!
Just look at all that wasted wine, Robert muttered, with a nod toward the fragrant red river that ran through the open conduit in the street.
Amy opened her mouth to protest, then decided he must be fooling. Marry come up, Robert! You must be pleased King Charles will be crowned tomorrow. Twelve years of Cromwell's rule was enough. Now we have music and dancing again. She felt like dancing, like spreading her burgundy satin skirts and twirling in a circle, but the press of the crowd made such a maneuver impossible, so she settled for bobbing a little curtsy. We've beautiful clothes, and the theater—
And drinking and cards and dice, Robert added.
That too, Amy agreed, turning back to ogle the mounted queue of nobility parading their way from the Tower to Whitehall Palace. Such jewels and feathers and lace! Fingering the looped ribbons adorning her new gown, she pressed harder against the rail, wishing she too could join the procession.
Where did they possibly find so many ostrich feathers in all of England? she wondered aloud, then burst into giggles.
Her aunt laughed and wrapped an affectionate arm around her shoulders. Where do you find the energy, child? You must come to Paris. Uncle William and I could use your happy smiles.
Read more here.