My Notorious Life by Kate Manning 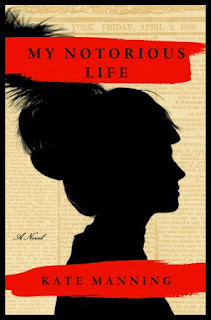 Axie, Dutch and Joe are children in NYC. Their father has died and their mother was severely injured at her job. Their mother is put into the hospital and the children get put on an orphan train and sent out west. Axie is 13 and does not want to get separated from her brother and sister. They get put into homes in Illinois. Axie goes back to NYC with Charlie, another orphan. She gets home and finds her mother pregnant and married to Mr. Duffy. Her mother goes into labor and it goes wrong.  The midwife was drunk. Mrs.Duffy tried to remove the placenta and some was left inside her.  Mrs. Duffy gets Axie and her mother to a ladies' doctor, Mrs.Evans.  Axie stays with the Evanses after her mother's death and learns the trade.  She grows up to become the Madame.
This is a really great read.  I thoroughly enjoyed it!

From the author:
Based on a true story from the scandalized headlines of Victorian New York City, My Notorious Life is a portrait of Axie Muldoon, the impoverished daughter of Irish Immigrants who becomes an enormously successful—and controversial—midwife. Separated from her siblings, apprenticed to a doctor, Axie parlays the sale of a few bottles of “lunar tonic for relief of female complaint” into a thriving practice as a female physician known as “Madame X.” But as she rises from the gutter to the glitter of Fifth Avenue, Axie discovers that the right way is not always the way of the law, and that you should never trust a man who says, “trust me.” But what if that man is an irresistible risk-taker with a poetical soul? Soon, Axie’s choices put her on a collision course with one of the most zealous characters of her era: Anthony Comstock, founder of the Society for the Suppression of Vice, and it will take all of her power and wealth to outwit him and save herself and her family from ruin.
A love story, a family saga, and a vivid rendering of a historical time and heated political climate, My Notorious Life is the tale of one woman making her indomitable way in a difficult world. Axie Muldoon is a heroine for the ages.

It was me who found her. April 1, 1880. The date is engraved on my story same as it is on the headstone, so cold and solid there under the pines. What happened that morning hurts me to this day, enrages me still, though many years have passed.


The time was just before dawn. She was there in the tub. It had claw feet, gold faucets. Marble was everywhere in that room, so magnificent. A French carpet. A pair of velvet settees, a dressing table, candelabra, powders and pomades, all deluxe. I knew something was wrong right away. When I knocked I knew. There was not no noise of bathing, just that slow drip. That plink of water landing on water, so dreadful. I went in and there she was. A scarf of red across her shoulders, down her chest. The water was red and cold with all her life leaked out. A bloodbath. My hands were trembling. Terrible sounds strangled in my throat, quiet so as not to wake the house. My little daughter and my husband were fast asleep. The maid was not yet up.
Mother of God she was dead. I collapsed down at the vanity reeling and keening. I couldn’t look but I had to. The scene was reflected so clearly in the mirror, and strange, how it was serene, almost. She seemed at rest. The way her hair fell you did not see the red cut. You saw the profile of the nose, the chin. She was a bather in a painting, so peaceful, but I hated her for what she done to herself. Even after how I cared for her so long. She would be my undoing now, too, not just her own. Who would believe a suicide? They would say I killed her. They would write me again in the headlines, as Murderess. Hag of Misery. She-devil. How they’d lick their chops. They’d come for me with their shackles and their oakum and their lies, then put me away for good unless by some conjurer’s snap I could get her poor corpse out of the water and away down the stairs and out to Fifth Avenue to disappear. It was the very morning of my Trial. I was due in court in three hours.
What could I do? What would happen to me now? If I could change places with her. The thought came to me. If only it was me dead there in the water.
I imagined it, picking up the knife.
My troubles would end. I’d not be a grief to anyone. If only I was dead. These ideas raced now through the panic. I looked again in the mirror at her reflection over my shoulder and seen all of a sudden how it wasn’t a bad resemblance. Our age was close enough. That black hair. And it was the mirror, that morning, the way we were doubled in it, that shown me the way to my escape.
Fast, I took the rings off my fingers. The gems from my ears. I put them on her. Her skin was wet and cold as fish, a shock to the touch. The diamonds sparkled on her delicate dead hands, on the collops of her lobes.
Why? I asked her, silent as I worked. But I knew why. Why was not the mystery.
There was not no choice. They would come for me. I ran now. I packed a bag. A reticule filled with cash. He helped me with it and kissed me goodbye, both of us afraid.
—Hurry, he said. —You got no time to waste.
My throat closed with panic and sadness. But I left him to it, my husband, to carry it off, to say it was me dead in the bath. He’d know what to do. He took the risk of it. He knew people. He had connections of influence. They’d believe him. He said we’d find each other later. There was no choice but to trust him. She was dead and the traps would be knocking any minute. There wasn’t no other way. I went out the back door in a hat and veil, which was nothing special at our address. Ladies was always coming and going in their veils and disguises, the curtains of their victorias drawn. Half of them would have worn mustaches or pup tents, anything not to be recognized departing from my notorious parlor. I went east across Fifty Second Street on foot, as it would not be advisable to use the driver. My carriage was well known as myself in all parts of town. I got on the omnibus down the Avenue, and from there I was off to the railyards, to book a ticket.
Meanwhile at the so-called Halls of Justice downtown, my enemies was coiled snakes lying in wait. How eager they was to see me in the dock at last. How disappointed, how outraged they would be, to receive a telegram from my lawyer with the news. The case was a bust. Stop. The accused was dead. Stop. Madame DeBeausacq a suicide. At first they scoffed and pshawed under their preposterous hairy mustaches. It was somebody’s idea of a joke, they said. They noted the date: April 1. They were sure that soon I would show up so they could smite me with their sanctimony and their outrage. But I did not show up, and soon half them toads had a new theory. That I was murdered, that a Tammany hoodlum snuffed me out to hush me up, to kill my society secrets along with me. Whatever they thought, the b*****ds was stunned out of what wits they had, which was not many. In the end, they celebrated. They bragged. They got me, was their feeling. Finally they got me. They said I would take my secrets to the grave.
To read more, click here.
Pages: 438
Published: 2013
By jmisgro at January 06, 2014