The Beauty Bride (The Jewels of Kinfairlie #1) by Claire Delacroix 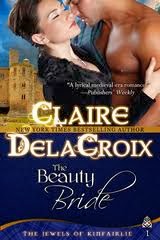 Madeline is auctioned off by her brother.  He told her that it was time to marry but she refused because her betrothed had only died six months ago. A dark stranger purchased her. His name is Rhys and he is wanted by the crown for treason. She is drawn to him especially after he kisses her and lights a fire in her.  James never kissed her like that.  But she is not cattle to be sold so she escapes the castle and runs away with a groom, Kerr. Unfortunately for Maddie, Kerr is not a nice fellow and tries to rape her.  But she is saved in the nick of time by Rhys, who followed her escape.
They decide to go to a nearby abbey where his aunt is the abbess. Kerr had hurt Maddie's horse and they need to get her looked at.  At the abbey, Maddie and Rhys are married. They consummate the marriage. Maddie has never felt so good before.  She has agreed to be a good wife to Rhys.
The next day riders come to the abbey and Rhys thinks it's the King's men after him. Maddie and Rhys just barely escape and they are followed all the way across Scotland. though it turns out that it is not the King's men and  after them.  Just who is chasing them and why?

More cherished than gold are the Jewels of Kinfairlie, and only the worthiest may fight for their love…The Laird of Kinfairlie has unmarried sisters, each a gem in her own right. And he has no choice but to see them all wed in haste.
Lady Madeline’s heart is not for sale…especially not to a notorious outlaw like Rhys FitzHenry. Yet Madeline’s hand has been sold, to none other than this battle-weary warrior with a price on his head. A more dutiful maiden might cede to the Laird’s command and meekly accept her fate, but Madeline has never been obedient.
She does not expect this taciturn man to woo her with fanciful stories, much less that each of his enthralling tales will reveal a scar upon his shielded soul. She never imagines that a man like Rhys could imperil her own heart while revealing so little of his own feelings. When Rhys’ past threatens his future, Madeline takes a leap of faith. She dares to believe him innocent — and risks her own life to pursue a passion more priceless than the rarest gem.She decides to run away, though she never dreams that Rhys will pursue her.
Excerpt:

Prologue
Kinfairlie, on the east coast of Scotland - April 1421

Alexander, newly made Laird of Kinfairlie, glowered at his sister.

There was no immediate effect. In fact, Madeline granted him a charming smile. She was a beautiful woman, dark of hair and blue of eye, her coloring and comeliness so striking that men oft stared at her in awe. She was fiercely clever and charming, as well. All of these traits, along with the score of men anxious to win her hand, only made Madeline’s refusal to wed more irksome.

“You need not look so annoyed, Alexander,” she said, her tone teasing. “My suggestion is wrought of good sense.”

“It is no good sense for a woman of three and twenty summers to remain unwed,” he grumbled. “I cannot imagine what Papa was thinking not to have seen you safely wed a decade ago.”

Madeline’s eyes flashed. “Papa was thinking that I loved James and that I would wed James in time.”

“James is dead,” Alexander retorted, speaking more harshly than was his wont. They had had this argument a dozen times and he tired of his sister’s stubborn refusal to accept the obvious truth. “And dead the better part of a year.”

A shadow touched Madeline’s features and she lifted her chin. “We have no certainty of that.”

“Every man was killed in that assault upon the English at Rougemont - that no man survived to tell the tale does not change the truth of it.” Alexander softened his tone when Madeline glanced away, blinking back her tears.

“We both would have preferred that James’ fate had been otherwise, but you must accept that he will not return.”
He was pleased to note how Madeline straightened and how the fire returned to her eyes. If she was spirited enough to argue with him, that could only be a good sign. “Though I appreciate a wound to the heart takes long to heal, you grow no younger, Madeline.”

Madeline arched a brow. “Nor do any of us, brother mine. Why do you not wed first?”

“Because it is not necessary.” Alexander glared at her, again to no avail. He knew that he sounded like a man fifty years older than he was, but he could not help himself -- Madeline’s refusal to be biddable was annoying. “I ask only that you wed, that you do so out of regard for your four younger sisters, that they too might wed.”

“I do not halt their nuptials.”

“They will not wed before you and you know it well. So Vivienne and Annelise and Isabella and Elizabeth have all informed me. I try only to do what is best for you, but you are all in league against me!” Alexander flung out his hands then rose to his feet, pacing the chamber in his frustration.

Madeline - curse her! - regarded him with dawning amusement. Trust her to be consoled by teasing him!