The Black Country by Alex Grecian 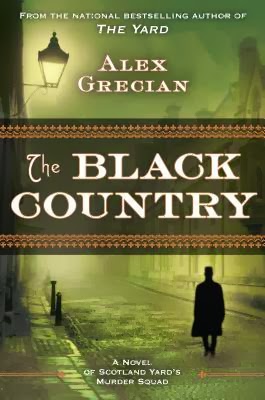 Inspector Walter Day and Sergeant Nevil Hammersmith get sent out to the British Midlands also called the "Black Country". Three people have gone missing in a coal mining town.  The locals are giving the men a hard time about finding these people. Meanwhile there is some sickness hitting the townspeople. Dr. Kingsley, who works for Scotland Yard, comes to the town the next day. Between the three of them they figure out where the missing people are and what is causing the sickness.

I enjoyed this story and did not figure it out until the author gave the clue to the reader! I will be getting more books by this man. This was the second in the series.

From the author:
The British Midlands. It’s called the “Black Country” for a reason. Bad things happen there.
When members of a prominent family disappear from a coal-mining village—and a human eyeball is discovered in a bird’s nest—the local constable sends for help from Scotland Yard’s new Murder Squad. Fresh off the grisly 1889 murders of The Yard, Inspector Walter Day and Sergeant Nevil Hammersmith respond, but they have no idea what they’re about to get into. The villagers have intense, intertwined histories. Everybody bears a secret. Superstitions abound. And the village itself is slowly sinking into the mines beneath it.
Not even the arrival of forensics pioneer Dr. Bernard Kingsley seems to help. In fact, the more the three of them investigate, the more they realize they may never be allowed to leave…

It was an unusual egg. Not at all like other eggs Hilde had Iseen. It was slightly larger than a robin’s egg, white with a thin spiderweb of red, visible under a paper-thin layer of snow. A bit of dirty pink twine curled out from under the egg, and Hilde reached out, nudged it with her fingernail. The egg turned, rolling over in its nest of straw and feathers and bits of old string. Hilde could see now that the worm-thread was embedded in mud on one side of the egg and on the other side of the egg was a large colored dot, slate blue, darker than a robin’s egg ought to be.
She adjusted her position in the tree, resting her behind against a big branch to free her hands. She looked down at the ground, but there was nobody to see what she was doing or to tell her no. Carefully she reached into the nest and plucked out the unusual egg. It was slippery, not as firm as the eggs she had handled in the past, and its surface gave a little under the pressure of her fingertips.
She held it up to the pale sun, turning it this way and that. It glistened, a dappled branch pattern playing over its surface. She brought it closer to her face. The blue dot in the center ringed a smaller black spot and reminded her of something, but it was out of context and it took her a long moment to place it.
And then she did and it was an eye, and the eye was looking at her.
Hilde reeled back and dropped the eyeball. It tumbled down through the branches below, bouncing once, then twice, off the trunk, and disappeared into a pile of soft snow-covered underbrush. Her foot came loose from its perch on the branch and she felt herself slip. Her weight fetched up against a smaller branch to the side, but it didn’t hold her. She felt the adrenaline rush too late as she grabbed for the nest and it came loose in her hand. Her dress snagged and tore, and all of her sixty-three pounds caromed off the branch and slammed back into the tree trunk.
Still holding the useless bird’s nest, Hilde fell to the ground, screaming all the way.