The Devil of Kilmartin by Laurin Wittig 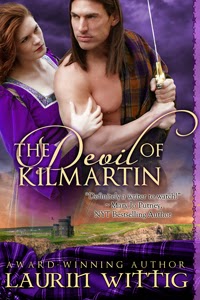 Elena runs away from her home after Dougal tells her that he killed her father and she will marry him so he can rule the clan.  She refuses and runs away. Symon, the Devil of Kilmartin is inside the stones.  He trying to fight off the pain in his head. He sees the woman running and the man coming after her.  Symon fights off Dougal and rescues Elena. He convinces her that he is no danger to her and they flee. As they are riding, he feels some relief as she touches him. Why, he wonders? they need a place to stay and rest and come upon Auld Morag's cottage. Auld Morag tells him of the prophecy. Will Elena be the answer to his clan's prayers? Elena knows that Dougal will keep coming after her.  Will she be safe from him?

I liked this book. The characters were interesting. I like that Elena figured out what Symon's problem was.

In the dark of night, Elena of Lamont must flee her home after her father’s death to escape the brutal clansman determined to satisfy his lust for power — and for her. But as the captivating beauty runs from one dangerous man she finds herself landing in the arms of another, one whose passionate embrace offers perils of its own…
As the chief of the Lachlan clan, Symon MacLachlan vows to protect the fiery-haired lass whose gentle touch relieves the demons clawing at his soul. Despite her fierce denials, he is certain Elena is the legendary Lamont healer — and certain that he must have her for his own. Desperate for her soothing caress — and unable to quell the desire burning inside him — Symon is compelled to lure Elena into marriage. But will he be able to win the love of the tender enchantress who has stolen his heart?
Excerpt:
Symon sensed a change in the lass, a spark in her eye that hadn’t been there a moment ago.  “Elena?”
“What do you offer me for my help?”
Surprise whipped through him.  “What do you wish?”
“My freedom.”
He watched her square her shoulders, as if she braced for a fight, and was startled to realize she was nearly as tall as he.  “You are no prisoner within these walls,” he said, circling around her.  “Did I not offer you hospitality?”
“Aye, but ‘tis not what I wish.”  She turned to face him.  “If I help you, and I am not saying I will, you must ensure my safe passage to wherever I choose.”
“Wherever?”
“In Scotland.  I do not wish to venture beyond the Highlands, just away from all who know me.”
“Why does your clan hunt you?”  He watched as the determination in her eyes wavered, then burned even brighter than before.
“That has naught to do with this, Symon.  Will you give me what I ask?”
He thought it over for a moment.  How could he wed the lass, fulfilling the prophecy and promise her what she asked?  “Where do you plan to go?”
Confusion slipped into her eyes, and fear.  “I have not decided as yet.”
“You have nowhere to go,” he said quietly, sensing an opportunity.
“I have not decided.”
Symon nodded knowingly.  Perhaps he could convince her that Kilmartin Castle was where she wished to be, in that way he could wed her and grant her wish.  What he needed was time, but the only way he would get that was to accept her terms.  “Very well.   But you must stay until my affliction is gone.”
“Nay.  I told you.  I cannot cure your affliction, but I think I can dampen its effects, at least for awhile.  I stay only until I deem it time to go.  I will not be bound to you, no matter what Auld Morag has to say.”
Symon moved toward her slowly, indirectly, weighing her strengths and weaknesses as if he faced her in armed combat.  “Yet the clan expects otherwise.”
“That is due to your own folly.  I care not what your clan expects of me.  I will help you as I can, but you must assure me of safe passage when the time comes that I decide to go.”
“Very well.  But for now, we will allow the clan to believe we will wed.”  She started to interrupt but Symon, close now, stopped her with a finger to her garnet lips.  The heat of her breath seared his skin.  “My clan needs hope for the future.”
Read more here.
Kindle Edition, 272 pages
Published September 22nd 2010 by Laurin Wittig
By jmisgro at January 17, 2014