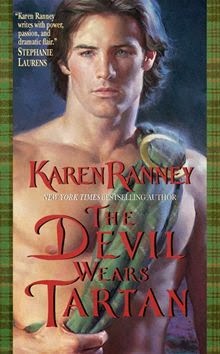 Davina made a mistake and is ruined. Her aunt is marrying her off to a man she has never met. When she gets to the altar she is surprised.  He is very good looking. The Earl of Lorne is quite surprised at Davina's looks too.  He did not expect much. It turns out they are a good match.  She falls for him and he falls for her but does not let on.  He was taken prisoner in China and was tortured with opium.  He still has "spells". What will become of them?

Another predictable romance novel. Similar story to another book I read with "devil" in the title.

The Devil Wears Tartan came to life because of something I read about Chinese history.  The article I was reading led to another link, which led to another, and like magic, the plot was born.
Marshall Ross and Davina McLaren are both flawed characters (love flawed people) who have made mistakes and paid dearly for them.  They are forced together by circumstances, but Fate, instead of being capricious in this instance, rewarded each of them with the other.  Marshall found in Davina a woman who could believe in him, and Davina found in Marshall a challenge, and someone who deserved both her loyalty and her love.
For an excerpt, click here.
Pages: 372
Published: 2008
By jmisgro at January 31, 2014