The MacKinnon’s Bride: The Highland Brides #1 by Tanya Anne Crosby 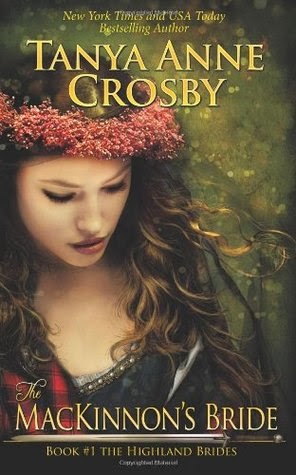 Page is sneaking away from her father's house to swim in the moonlight when a group of men kidnap her. The leader is the father of a boy that is staying at her house.  Page thinks the boy, Malcolm, was mistreated by his father. But that was not the truth.  The MacKinnon wants his son back from her father.  Iain will exchange Page for Malcolm.  But when he goes to make the exchange, Page's father tells him that he does not want Page.  "To what you want with her", he says.
Iain keeps her but does not tell her what her father says. They travel back to his home and on that journey they fall in love.

This was a good story.  I liked it enough to want to read other books by this author. I really liked the cover art. I had gotten this book for free on amazon but then I also got it again in a collection of five books that I paid for.

About the Book: An eye for an eye. Descended of the powerful sons of MacAlpin, Iain MacKinnon refuses to bow to the English. When his young son is captured by a minion of the English king, the fierce Scottish chieftain vows to stop at nothing to secure the lad’s return. Retaliating in kind, he captures the daughter of his enemy, planning to bargain with the devil.
A daughter forsaken. FitzSimon’s daughter has lived her entire life in the shadows of the man she called father—yet never would she have imagined he would deny his only daughter. Even as Page blames her captor for welching on a contract with her father, she suspects the truth…
The shadows hold secrets … now only the love of her reluctant champion can save the MacKinnon’s Bride.
Click here for an excerpt.
Kindle Edition, 326 pages
Published October 16th 2012 by Oliver-Heber Books
By jmisgro at January 17, 2014

Sounds good JoAnne! Thanks for the link to the free copy too.

You are welcome!! Sometimes it's a chore to go through all those free ebooks to find a good one!