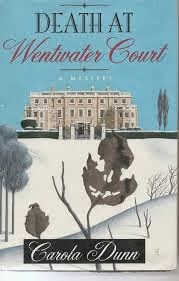 Daisy Dalrymple has started a new job for Town and Country magazine.  She is to write about Wentwater Court. She arrives takes a few photos of ice skaters and the house. The next morning a body of one of the guests is discovered by James, Fenella and Daisy. Daisy had the camera with her and she takes some photos.  A man from Scotland Yard arrives after Sir Hugh makes a call.  Daisy helps the Scotland Yard man, Alec, solve the mystery.
I enjoyed this book.  It is the first in the Daisy Dalrymple series. Daisy is a delightful 1920's young woman. She is an Honorable but feels she must make her own way since the death of her father.

It's the early 1920s in England--the country is still recovering from the Great War and undergoing rapid social changes that many are not quite ready to accept.  During this heady and tumultuous time, the Honorable Daisy Dalrymple, the daughter of a Viscount, makes a decision shocking to her class: rather than be supported by her relations, she will earn her own living as a writer.  Landing an assignment for Town & Country magazine for a series of articles on country manor houses, she travels to Wentwater Court in early January 1923 to begin research on her first piece.  But all is not well there when she arrives.  Lord Wentwater's young wife has become the center of a storm of jealousy, animosity, and, possibly, some not-unwanted amorous attention, which has disrupted the peace of the bucolic country household.
Still, this is as nothing compared to the trouble that ensues when one of the holiday guests drowns in a tragic early-morning skating accident.  Especially when Daisy discovers that his death was no accident....
In a series debut that is sure to delight fans of the classic British cosy mystery, Death at Wentwater Court brings readers old and new back to the "golden age" of mystery.

Excerpt:
He'll come to a bad end, mark my words, and she won't lift a finger to stop him. It's the little ones I'm worried about." The stout lady heaved a sigh, her old-fashioned mantle, a hideous yellowish-green, billowing about her. "Four already and another due any day now."
Daisy Dalrymple was constantly amazed at the way total strangers insisted on regaling her with their life stories, their marital misfortunes, or their children's misdeeds. Not that she objected. One day she was going to write a novel, and then every hint of human experience might come in handy.
All the same, she wondered why people revealed to her their innermost secrets.
When the plump lady with the drunkard for a son-in-law left the train at Alton, Daisy had the 2nd Class Ladies Only compartment to herself. She knelt on the seat and peered at her face in the little mirror kindly provided by the L&SW Railway Company. It was a roundish, ordinary sort of face, pink-cheeked, not one calculated to inspire people to pour out their souls. A confidante, Daisy felt, ought to have dark, soulful eyes, not the cheerful blue that looked back at her.
Near one corner of a mouth of the generous, rather than rosebud, persuasion dwelt the small brown mole that was the bane of her existence. No quantity of face-powder ever hid it completely.
The scattering of freckles on her nose could be smothered, however. Taking her vanity case from her handbag, Daisy vigorously wielded her powder-puff. She touched up her lipstick and smiled at herself. On her way to her first big writing assignment for Town and Country, blase as she'd like to appear, she had to admit to herself she was excited--and a little nervous.
At twenty-five she ought to be sophisticated and self-confident, but the butterflies refused to be banished from her stomach. She had to succeed. The alternatives were altogether too blighting to contemplate.
Was the emerald green cloche hat from Selfridges Bargain Basement a trifle too gaudy for a professional woman? No, she decided, it brightened up her old dark green tweed coat just as intended. She straightened the grey fur tippet she had borrowed from Lucy. It was more elegant than a woollen muffler, if less practical on this icy January morning.
Sitting down again, she picked up the newspaper the woman had left. Daisy was no devotee of the latest news, and on this second day of January, 1923, the headlines she scanned looked very much like those of a week ago, or a fortnight: troubles in the Ruhr and in Ireland; Mussolini making speeches in Italy; German inflation raging out of control.
Opening the paper, she read a short piece describing the latest wonders unearthed from Tutankhamen's tomb, and then a headline caught her eye:
FLATFORD BURGLARY
Scotland Yard Called In
Daisy had been at school with Lord Flatford's daughter, though not in the same form. Shocking how the merest mention of an acquaintance was more interesting than the most serious news from abroad.
In the early hours of the New Year, thieves had walked off with theFlatfords' house-guests most valuable jewelery, not yet returned to his lordship's safe after a New Year's ball.
She had no time to read more, for the clickety-clack of the train over the rails began to slow again and the next station was Wentwater. Wrestling with the leather strap, Daisy lowered the breath-misted window. She shivered in the blast of frosty air, heavy with the distinctive smell of a coal-fired steam engine, and wondered whether a cold neck was not too high a price to pay for elegance.
At least the knot of honey brown hair low on her neck, out of the way of the hat, provided a spot of warmth. For once she was glad she had indulged her mother by not having her hair bobbed.
The train rattled and shuddered to a halt. Leaning out, Daisy waved and called, "Porter!"
The man who answered her summons appeared to have a wooden leg, doubtless having lost the original in the Great War. Nonetheless, he made good time along the platform, swept clear of snow. He touched his peaked cap to her as she stepped down, clutching Lucy's precious camera.
"Luggage, madam?"
"Yes, I'm afraid there's rather a lot," she said doubtfully.
"Not to worry, madam." He hopped nimbly up into the compartment and gathered from the rack her portmanteau, tripod, Gladstone bag, and the portable typewriter the editor had lent her. Laden, he somehow descended again. Setting everything down, he slammed the door and raised his arm. "Right away!" he shouted to the guard, who blew his whistle and waved his green flag.
As the train chugged into motion, Daisy crossed the footbridge to the opposite platform. She surveyed the scene. The station was no more than a halt, and she was the only person to have descended from the down-train. Signs over the two doors of the tiny building on the up-platform indicated that one end was for Left Luggage, the other serving as both Waiting-Room and Ticket Office.
The Hampshire countryside surrounding the station was hidden by a blanket of snow, sparkling in the sun. Frost glittered on skeletaltrees and hedges. The only signs of life were the train, now gathering speed, the uniformed man carrying her stuff across the line behind it, and a crow huddled on the station picket fence.
"Your ticket, please, madam."
She gave it to him to clip. "I'm staying at Wentwater Court," she said. "Is it far?"
"A mile or three."