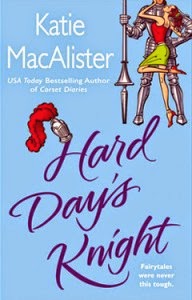 Pepper lost her job as a software engineer. So she goes with her cousin CJ to Ontario's Renaissance Faire. CJ wants to fix her up with a man. Pepper latches onto an Englishman named Walker.  He is the head of a jousting team. Walker's nemesis is a man named Farrell.  Pepper decides that she wants to learn how to joust, because Farrell says women can't. Through her involvement in the sport she notices that one of the horses was hurt after one of the men on Walker's team get hurt.  The lance was messed with. The horse's leg was cut.  Pepper comes from a long line of veterinarians. She was halfway through vet school when she quits. Pepper felt that she would never be as good as her family.
The team needs to replace the hurt man and Walker is the alternate but he refuses to compete. He hurt a man very badly in his last match and quit.  He and Pepper have the same issues.  Will they be able to overcome and be together?  Will the team figure out who is trying to hurt their team?

I like MacAlister's writing very much.  Her books are always light and entertaining.

Fairy tales were never this tough.
Men in Tights…
…never looked so good. At least that’s Pepper Marsh’s first impression when she attends the International Jousting Competition at London, Ontario’s Renaissance Faire. An unemployed and unattached software engineer, Pepper has had enough of the computer geeks in her dating pool. She yearns for a man of yore. A man not afraid to stare death in the face and laugh at it. A man with a big lance….
Pepper’s cousin promised to find her a knight in shining armor, on the condition that Pepper walk around in wench get-up. With her mind on her embarrassingly revealing bustier, Pepper promptly steps into the path of an oncoming steed…and is rescued by sexy Englishman Walker McPhail. Once the wild man of jousting, Walker has let a brush with death keep him out of the ring. Though his emotions are clad in an almost impenetrable armor, Pepper finds Walker infuriatingly sexy—and is about to go medieval on his heart…

“Right, so where are all the good-looking men in formfitting tights?”
“Probably rehearsing. You can set that down next to the cooler.”
“Rehearsing? Rehearsing what? Hunky men in skintight clothing don’t rehearse! They’re far too manly for such a sissy thing. Actors rehearse. Men in tights … well, they just don’t. Unless … hey! You wouldn’t drag me out here to the middle of nowhere by promising me really handsome, dashing guys in extremely cool knight getup without telling me they were all gay, would you?”
CJ grinned as I deposited a box of toilet paper, napkins, and assorted towels on top of the red plastic cooler. “I’m sure some are, but not all. Don’t worry; you’ll have lots of manly-man guys to slobber over.”
“I’d better,” I muttered darkly as I stomped off to the car to fetch another load of camping accessories. Twenty minutes later I returned from the wilds of the parking lot. “You know, I always imagined ye old days of medieval yore had a whole lot more dashing, daring knights hanging around, and fewer steaming piles of poop.” I stepped carefully over the huge pile of fly-bespecked horse manure, and staggered toward the ever-growing collection of bags, boxes, coolers, food hampers, and suitcases that contained those items my cousin deemed vital to our continued existence.
“Oh, no, poop was everywhere back then. Open sewers, you know,” CJ answered from where she was on her knees digging into a rucksack, muttering to herself as I dropped a box of canned beans and packages of freeze-dried hiking food next to her.
“I still haven’t seen even one man in tights. There’s a couple of women a few tents down who are dressed like knights, but that’s it. So help me, Ceej, if you dragged me out here on false pretenses …”
“I didn’t!” CJ all but climbed into the rucksack, her voice muffled as she tried to placate me. “They’re rehearsing, I promise. Everyone rehearses before opening day. The vendors are probably vendoring or setting up their booths. And the jousters are doing practice runs.”
“Okay, but I’d better start seeing some soon. You promised me great big herds of manly guys being knights and rogues and swashbuckling pirates.” I peered around at the sea of tents that surrounded us. The flat, open field adjacent to the fairgrounds housing the Faire served as a tent city of Faire performers, vendors, employees, and joust participants. Most of the tents were blocky squares and rectangles of dull gray or green, like the one CJ had provided for us, but at the far end of the tent city were clustered beautiful striped tents of all colors, some with pennons and flags bearing coats of arms waving lazily in the late afternoon summer breeze. Other than the two women I’d seen coming from the car, the tent city was strangely devoid of human life. “I’m not seeing even a small flock of manly knights, much less a herd of them. In fact, there doesn’t seem to be anyone here at all. Are you sure that this Faire is a hotbed of romance and dishy guys?”