Bury Your Dead by Louise Penny 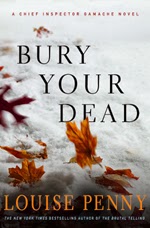 It took me forever to get through this book. I had figured out the mystery pretty early on who the Hermit was but not who killed him until almost the end. I kept getting confused with the style of how this book was written. I don't understand why the font was not different when Gamache was remembering what happened to Agent Morin. It was very confusing.  I was also bored with the whole Samuel Champlain/Anglos vs. French story.  It was too long.

Gamache was in Quebec to research an old battle between the French and English. He was asked to help in the investigation of the death of Augustin Renaud, an man who searches for the remains of Champlain, the founder of Quebec. Renaud was found in the basement of the Literary and Historical Society. How did he get there and why was he there? Gamache figures it out, of course. Meanwhile Jean-Guy Beauvoir was in a small village trying to figure out the real killer of the Hermit because Gamache did not believe that Olivier, the man in jail for this crime, was the actual murderer.

From the author:
As Quebec City shivers in the grip of winter, its ancient stone walls cracking in the cold, Chief Inspector Armand Gamache plunges into the most unusual case of his celebrated career. A man has been brutally murdered in one of the city's oldest buildings - a library where the English citizens of Quebec safeguard their history. And the death opens a door into the past, exposing a mystery that has lain dormant for centuries...a mystery Gamache must solve if he's to apprehend a present-day killer.

Up the stairs they raced, taking them two at a time, trying to be as quiet as possible. Gamache struggled to keep his breathing steady, as though he was sitting at home, as though he had not a care in the world.
Sir? came the young voice over Gamaches headphones.
You must believe me, son. Nothing bad will happen to you.
He hoped the young agent couldnt hear the strain in his voice, the flattening as the Chief Inspector fought to keep his voice authoritative, certain.
I believe you.
They reached the landing. Inspector Beauvoir stopped, staring at his Chief. Gamache looked at his watch.
47 seconds.
Still time.
In his headphones the agent was telling him about the sunshine and how good it felt on his face.
The rest of the team made the landing, tactical vests in place, automatic weapons drawn, eyes sharp. Trained on the Chief. Beside him Inspector Beauvoir was also waiting for a decision. Which way? They were close. Within feet of their quarry.
Gamache stared down one dark, dingy corridor in the abandoned factory then down the other.
They looked identical. Light scraped through the broken, grubby windows lining the halls and with it came the December day.
43 seconds.
He pointed decisively to the left and they ran, silently, toward the door at the end. As he ran Gamache gripped his rifle and spoke calmly into the headset.
Theres no need to worry.
Theres forty seconds left, sir. Each word was exhaled as though the man on the other end was having difficulty breathing.
Just listen to me, said Gamache, thrusting his hand toward a door. The team surged ahead.
36 seconds.
I wont let anything happen to you, said Gamache, his voice convincing, commanding, daring the young agent to contradict. Youll be having dinner with your family tonight.
Yes sir.
The tactical team surrounded the closed door with its frosted, filthy window. Darkened.
Gamache paused, staring at it, his hand hanging in the air ready to give the signal to break it down. To rescue his agent.
29 seconds.
Beside him Beauvoir strained, waiting to be loosed.
Too late, Chief Inspector Gamache realized hed made a mistake.
Give it time, Armand.
Avec le temps? Gamache returned the older mans smile and made a fist of his right hand. To stop the trembling. A tremble so slight he was certain the waitress in the Quebec City caf hadnt noticed. The two students across the way tapping on their laptops wouldnt notice. No one would notice.
Except someone very close to him.
He looked at mile Comeau, crumbling a flaky croissant with sure hands. He was nearing eighty now, Gamaches mentor and former chief. His hair was white and groomed, his eyes through his glasses a sharp blue. He was slender and energetic, even now. Though with each visit Armand Gamache noticed a slight softening about the face, a slight slowing of the movements.