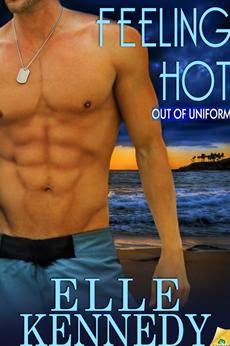 Out of Uniform #7
Cash has been on deployment for 6 months. He needs a woman bad. He goes to a bar and the only woman that appeals to him is a Navy groupie. He doesn't want her. He's about to leave the bar when a bunch of old ladies come in. He sees a door and ducks in there. He meets a beautiful blonde named Jen. She is hiding in there too. Her friend just got a promotion and they are celebrating but Jen got fired today and her ex is stalking her. Cash is very attracted to her and they were about to get it on when a man bursts in the room and throws them out. Jen gives Cash her number but when he went outside it got rained on and the numbers washed away. He is crushed. He really liked her.
A couple of days later his LT, Carson, calls for a favor. Carson needs a place for his sister to hide. She's having problems and Carson needs Cash to hide and protect her but he'd better not sleep with her. Guess who the woman is?
Cash made a promise and he will not back down. Jen wants him and her brother is not going to stop her from what she wants. Can Cash hold out? Will the stalker really leave Jen alone?

I loved this book. I like the characters in these stories. You feel like they are your friends. The sex is pretty hot too!

In tight quarters, anything can happen.
It’s been a rough month for Navy SEAL Cash McCoy. Fresh off six months of celibacy during his deployment, he almost got into a hot blonde’s panties before they were interrupted. Since then, he still hasn’t gotten laid. The reason? He lost her number. And no other woman has replaced her face in his fantasies.

Then his CO asks him to keep an eye on his sister for a few weeks. Just until her psycho stalker ex is transferred. Cash’s new houseguest is none other than the same gorgeous, quirky blonde. And just his luck—his orders include an emphatic hands off.
Jen Scott is having none of it. Now that she has a second chance, she’s not letting Cash slip away. Orders be damned, he’s the one man capable of helping her explore her sexuality. She’s even willing to break her own rule—never date military men—to get the gorgeous SEAL into her bed.

Except Cash makes it clear he wants more than she bargained for. Much more. Not just her body, but the one thing she promised herself she’d never give to a man in uniform. Her heart.

She slanted her head. “What line of work are you in?”

He hesitated for a beat, then said, “Security.”

Fine, he was lying again, but he’d already escaped one navy groupie tonight and he wasn’t looking for a repeat performance. Then again, this woman was so beautiful he might be willing to make an exception.

“Huh. I figured you’d say military. You give off a military vibe. I mean, look at that big, buff body of yours—it ought to be illegal.”

He didn’t miss the slight note of derision when she said the word military. “Got something against military men?” he asked lightly.

“Nope. I respect the hell out of them,” she answered. “I just don’t want to date them.”
He frowned, a part of him wanting to admit he’d lied about his job, just to see how she’d react. But she kept talking before he could get a word in. “I bet you’re good at security. Me, on the other hand? I suck at everything.”

Cash smiled. “I don’t believe that.”

“It’s true. That’s why I always get fired. School was never my thing, so I didn’t go to college. I have no interest in medicine like my mom, no distinguishable talents, no great passions. I like messing around with my camera and taking pictures, but that’s just a hobby.” Vulnerability flashed in her big blue eyes. “Do you think there’s a certain age when you should have everything figured out? Because I just turned twenty-six, and I still have no idea what I want to do with my life.”

He shrugged. “I think everyone figures stuff out at their own pace. Eventually you’ll find yourself on the right path.”

She pursed her lips in thought. “But my porn-star name sucks. You know how you’re supposed to take the name of your first pet and pair it with the street you grew up on? Well, our dog’s name was Boris and I grew up on Denton Street. Boris Denton. That sounds like a dictator.”

“I’m not even going to ask why you’d name your dog Boris.”

“Hell yeah. Or maybe an actor.” She clapped her hands together. “An actor who plays a cowboy. Can’t you see it?” Her voice deepened to mimic the movie-man voice from the previews. “One duel, one chance to avenge his pa’s murder…Cash McCoy in…High Noon Outlaw.” She grinned at him. “Maybe that’s what I should do—write the copy for movie trailers.”