Getting Hotter by Elle Kennedy 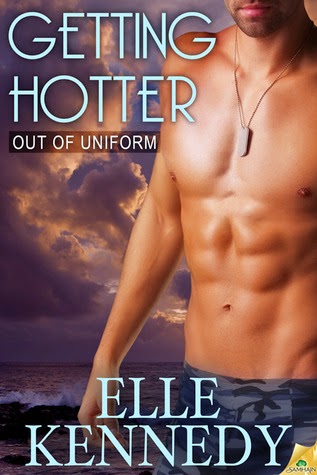 Out Of Uniform #8
Seth wants Miranda and has for a long time. He has been helping her since she moved to San Diego from Las Vegas where she used to work for his mother. Miranda's grandmother died and left her some money which she used to buy a dance studio. She also works part-time as a bartender and she has 6 year old twins. Seth has been trying to get her into bed but she keeps telling him she is not interested and she has no time.

But when a hurricane hits, her apartment gets flooded and she and the kids stay in Seth's extra bedroom. Dylan, Seth's roommate doesn't mind. He likes kids, Seth doesn't. But after a couple of days he moves over to Aiden's place to use his guest room. Dylan has feelings for Aiden. Where does Aiden stand?

Seth eventually wears Miranda down and they start having some awesome sex when the kids aren't around. He really likes Miranda but he isn't into kids and the twins know it. Why does he not like the twins? Will the relationship last?

I loved this one. I cried a couple of times. The twins were great characters!

A good bad boy is hard to find.
Seth Masterson has been lusting over Miranda Breslin since the moment he saw her on a Vegas stage. Now that he’s been asked to watch out for her as she opens a dance studio in San Diego, he’s all over it, figuring it’s his chance to get her in his bed. Except the stubborn single mom seems determined to deny their crazy-sizzling sexual chemistry. In typical SEAL fashion, Seth makes it his personal mission to prove her wrong.
Miranda got over her attraction to bad boys about the time one of them knocked her up at the age of eighteen. Seth’s mocking gray eyes and military-buff bod, though, are pure and utter temptation. And when a flooded apartment forces her and her twins to move in with him, she can no longer resist the urge to set off some serious fireworks between the sheets.
But give him her heart? No, thank you. Any involvement with Seth will be strictly physical—and temporary. So when Seth decides permanent is what he wants, Miranda must steel her defenses before she does something incredibly foolish…like fall in love.

Warning: This book contains a bad boy SEAL who knows what he wants and will go to any lengths to get it. Expect some graphic language, hot sex, seduction, hot sex, dirty talk, hot sex, a little man-on-man action, hot sex. Oh, and hot sex.

Miranda dug her thumbs into the arch of her foot, knowing the ache in her feet didn’t bode well for the rest of the night. She had four hours left in her shift. Four hours of running up and down that bar catering to the Friday-night crowds. And tomorrow she’d be in the dance studio from morning until late afternoon. Her poor feet were definitely going to revolt if she kept this up.

“You just groaned. A weary, life-sucks-ass type of groan.”

She blinked. “I did?” When he nodded in confirmation, she let out a sigh. “I was just thinking how I have to be at the studio at ten in the morning tomorrow and how much my feet are going to hate me for it. Tending bar all night and then standing en pointe all day is no piece of cake.”

He sounded genuine, not a hint of condescension in his voice, and Miranda’s eyebrows rose. “Really? You’re not going to roll your eyes and tell me I know nothing about real pain? You know, ’cause I’m not a badass SEAL like you?”

“Trust me, babe, I’ve got nothing but the utmost admiration for dancers. Once when I was a kid, I sat there watching my mom soak her feet after three back-to-back performances.” Seth blanched. “To this day I’m confident in saying that what her feet looked like that night is comparable to any battle wound I’ve come across.”

Miranda burst out laughing. She didn’t doubt it. People often had an idealistic view of dancers as beautiful, magical creatures, but one look at a dancer’s feet and that bubble of perfection was liable to burst. Calluses, blisters, cracked toenails, red, flaking skin…hardly beautiful or magical.

For a moment it surprised her that Seth knew what actually lay behind the curtain, until she remembered that he’d pretty much grown up backstage at the iconic Paradis Theater on the Vegas Strip. His mother had been the star of the show for twenty years before retiring, and now worked as the head choreographer. Missy also happened to be Miranda’s mentor and staunchest supporter; for a girl who’d grown up without a mom, Miranda had been utterly grateful to have someone like Missy in her life. After Miranda’s grandmother died and left her that small inheritance, Missy was the one who encouraged her to buy the dance school in San Diego, and it was the best decision she’d ever made.

“I should get back to work.” She leaned forward to slip into her sneakers, only to jump when she felt Seth’s hand on her arm.

Her breath caught. She found herself going still. It had been so very easy to shrug out of that young guy’s grip in the hall, but here, with Seth, she couldn’t bring herself to push him away.

“How long are we going to fight it, Miranda?” His voice was rough, his expression darkening with what she could only describe as sinful challenge.

She gulped. Ignored the flashes of heat rippling over her flesh. “Fight what?” she asked, feigning ignorance.

He laughed, slow and deep. “You’re really gonna pretend it’s not there? The chemistry between us?”

“We don’t have chemistry.”

And yep, she was a filthy liar. She and Seth Masterson had so much chemistry they could open their own laboratory. Or teach a college science seminar. Or—

He cut into her thoughts once more. “I’ve been very patient up until now. Pretending not to notice the way your nipples get hard whenever I’m around. Acting like it’s the temperature that brings that red flush to your cheeks when we both know it’s pure sexual arousal setting your skin on fire. And don’t get me started on the way you look at me.” His voice grew even raspier. “Those big hazel eyes of yours eat me up like I’m a big, juicy steak, baby.”

Eating Seth Masterson up with her eyes? Well, she couldn’t tear her gaze from the sensual curve of his mouth or the strong line of his jaw, so yeah, might as well check that off too.

Even though Seth must have noticed all three responses, Miranda decided to keep playing dumb. It was the only way to maintain some semblance of control over a conversation that had swiftly and unexpectedly gotten out of hand.

“Big, juicy steak?” she echoed dryly. “Someone thinks highly of himself.”

He just laughed. “We both know you’re attracted to me.”

“And I’m attracted to you,” he said with a shrug. “But unlike you, I’m not gonna bat my eyelashes like a Disney princess and act like I don’t want to get you naked.”