Hotter Than Ever by Elle Kennedy 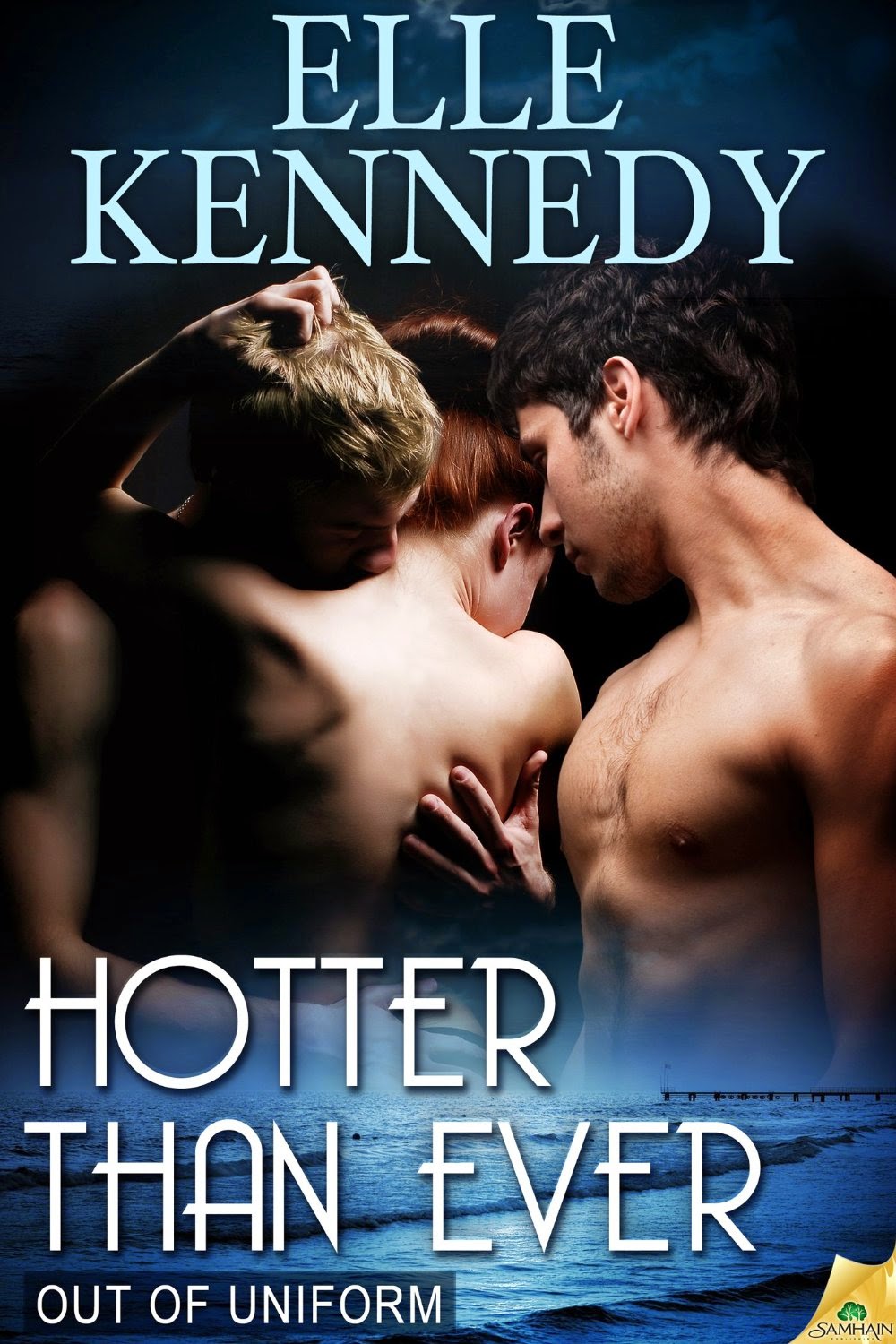 Out of Uniform #9
Claire is about to get married when Dylan, her fiance's brother comes into the room. He tells her that Chris has decided not to marry her and he left the country club. She is devastated. Dylan and Claire don't get along but he takes her to his home in San Diego. He is a SEAL and he is stationed there. He feels really bad for what his brother has done to her, even though he thought that Claire and Chris were not right for each other.
They get to his apartment and he tells his roommate Aiden what he has done. Aiden doesn't mind that Dylan brought Claire home. He thinks she is smoking hot. Dylan agrees but he doesn't like her. Claire and Chris visited Dylan a few months back and Claire saw Dylan and Aiden making out. It turned her on. Later that night Claire gets drunk and asks the men if they are gay and they both admit they like men and women. Wow!
Claire and Dylan continue to snip at each other in spite of being attracted to each other, so Aiden locked them in the bedroom together until they worked out their problems. They ended up having sex. Dylan told her that the men wanted a relationship with her - the three of them together. That shook Claire up. Then she finds out that Chris (her ex) took another woman on their honeymoon trip that Claire's father paid for. Apparently, Chris was seeing this woman while they were still together. Her self-esteem is gone. When Claire asked Dylan if he knew about this other woman, he said no. He and Aiden told Claire that she was beautiful and sexy and they could not understand why Chris did that to her. They wanted her very much! What was she going to do?

I liked this book. The story was great and the length was longer than the first three books in this series which I read.

When you land in hot water, swim for safety—or let the fire burn.
Claire McKinley has just experienced every bride’s nightmare. The groom is a no-show, and now she must face five hundred guests alone. Furious and humiliated, Claire seeks help from the most unlikely candidate—her almost-brother-in-law, who promptly whisks her away to his apartment in San Diego, where she can recover her pride in peace and quiet.
Dylan Wade is no fan of Claire’s, but no way can he leave the jilted bride in her time of need. Bringing her home seems like a good idea—until he remembers his new roommate. Dylan’s relationship with Aidan is…complicated. And with Claire thrown into the mix, life becomes even more…complicated.
Claire is blindsided by her attraction not only to Dylan, but also to Aidan, a man she’s just met. Soon they’re caught up in an all-consuming sexual storm they can’t fight even if they wanted to. Yet Claire wonders if it can last, or if she’s just setting herself up for more heartache.
Warning: This book is very dirty. Ménage a trois and man-on-man dirty. Graphic-language and explicit-sex dirty. Basically? Dirty. You’ve been warned.

Excerpt:
“What’s going on, Dylan?” Fear darted through her. “Is everything okay? Is Chris all right?”

He shuffled awkwardly, raking a hand through his short blond hair.

“Look,” he started, his voice a tad hoarse, “Chris is…um…aw shit, there’s no easy way to say this, okay? So I’m just going to do it, and I want you to know that doing this brings me no pleasure. You and me…we don’t really get along, and then there was that whole visit thing and…you know, what you saw at my place…which you never brought up again, and I’m really grateful for that, by the way—”

“Oh for the love of God,” she interrupted. “Quit babbling and say what you came here to say.”

“He left.” Misery flashed across Dylan’s face. “He couldn’t go through with the wedding. He…uh, he doesn’t think you two are right for each other.”

Shock slammed into her, so powerful she nearly keeled over.

Chris was calling off the wedding?

A rush of humiliation joined the unwavering shock. Oh God. The groom backing out at the last minute was definitely not part of her childhood fantasy.

As tears filled her eyes again, she looked at Dylan with dismay. “I can’t believe this.”

He looked upset. “I’m so sorry. I shouldn’t be the one telling you this. My brother is a bastard for running away, and I promise you, I tried to get him to do the right thing. I told him it was his responsibility to talk to you, but I guess he thought it would be too painful or something.”

“Wait a minute,” she burst out, as something suddenly registered. “What do you mean, he left?”

Dylan’s throat jumped as he gulped. “He left. As in, no longer here.”

“You mean he left the country club?” Her mouth dropped open. “He just drove away?”

There was a quick nod.

Her pulse careened into cardiac-arrest territory, her throat tightening with horror when she realized what that meant. “He’s going to make me face all those guest by myself?” Her breathing went shallow. “I’m the one who has to tell everyone there won’t be a wedding?”

Shock flitted through Dylan’s eyes. “What? No, of course not. Don’t worry, my mom will make the announcement.”

Agony and embarrassment heated her cheeks as she pictured Dylan’s sweet mother getting up there in front of hundreds of strangers and telling them they’d wasted their time in coming here.

“You can’t put that on Shanna,” she moaned. “Oh God. This is so humiliating!”

She ignored him, her brain continuing to run over all the mortifying implications of Chris’s cowardice.

“I have to tell my parents,” she mumbled between unsteady breaths. “And Father Thomas. Oh gosh, do you think Frank Lowenstein will expect us to reimburse him for renting out the Lavender Ballroom?”

Her hands started shaking again. More and more thoughts flew into her head. “My boss is out there, and all my colleagues. I can’t go out there and have everyone feeling sorry for me.” Her gaze darted toward the mirror again. “Oh shit, I can’t be wearing this gown when they see me.”

The next few minutes were a blur of irrationality, a heart-pounding, panic-induced daze that somehow ended with Claire’s wedding dress turning into a pool of fabric at her feet. She had no recollection of getting undressed—and apparently no sense of modesty, either—but suddenly she was wearing nothing but a strapless white bra and matching thong, completely on display for her runaway groom’s brother.

And yet when it finally dawned on her that she’d just stripped down to her underwear, she couldn’t even dwell on the fresh round of embarrassment because a new realization had swooped into her head.

“Where am I supposed to go?” she said miserably. “Is Chris at our apartment?”

Dylan looked utterly disoriented, his green eyes moving from her nearly naked body, to the discarded wedding gown, then up to her face. “I don’t know,” he sputtered. “Look. Claire. You’re freaking out and you need to dial it down, okay?”

“Where am I supposed to go?” she repeated, raising her voice over the loud drumming of her heart. “I don’t even have a car! My parents drove. Oh shit, my parents. They’ll want to take me home. I can’t go home with them, Dylan! They’ll hover over me and my mom will stuff me with cookies because she thinks cookies are the solution for all of life’s troubles, and—”

A sharp sting on her cheek made her head jerk up.