Kiss A Girl in the Rain by Nancy Warren 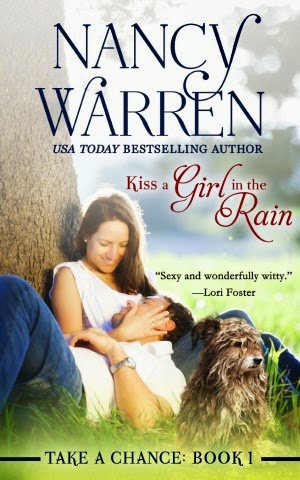 Evan's mother sends him a list that he made when he was 12 in his birthday card. He is turning 35. He is growing unhappy in his career. He is a very successful corporate lawyer. He has been seeing the same woman, Tessa, for two years. She is a lawyer at the same firm. He takes her home to meet his parents but she doesn't fit in. His parents are hippies with their own way of living. Then he gets a call. Their boss, his mentor, died. Evan is crushed. This man was like a second father to him.
Evan starts looking at things differently so he quits his job. Tessa dumps him. He decides to work on Evan's Amazing Life list (below).
He decides to ride across America first but he doesn't get far. A dog runs out in front of his motorcycle and the bike gets broken and the dog is hurt. He is in the middle of nowhere. A police cruiser comes by and says Doc Sorenson is up the hill. He walks up there and she lets them in. But she is a people doctor, not a vet.
Evan and Caitlin are seriously attracted to each other and start dating while he is in town, waiting on the part to fix his bike. It's like they belong together. The town welcomes him, wanting him to be a part of them.
Will Evan continue on his journey or will he stay in Miller's Pond?

In this sexy, humorous contemporary romance, a lost dog brings together a wealthy drifter and a small town doctor and changes all their lives forever.

Evan Chance is a man out to complete the bucket list he made as a kid, starting with ride a motorcycle across America. Caitlyn Sorenson is the sexy country doctor standing in his way. Or is she the dream he’s been searching for?

When Evan Chance gives up a successful corporate law career to tackle the bucket list he wrote when he was twelve, he has no idea where the road will lead him.

Caitlyn Sorenson is a happily settled small town doctor. When a sexy drifter rolls into town after a motorcycle accident leaves him stranded in Miller’s Pond for a few days with the homeliest dog ever, she can smell trouble even as she’s drawn to a man who is only passing through town.

But some scorching hot nights and a blooming tenderness mean two people will have to face up to the challenges of love.

When Evan Chance read the bucket list he’d penned when he was twelve years old, he caught a
glimpse of the man he‘d wanted to be when he grew up. Now, at nearly thirty-five, he knew he was
not that man.

Lists were important to Evan. He had master lists of ten-year, five-year and one-year goals,
broken down all the way to daily task lists. He kept a catalogue of people he hoped to meet, all
corporate movers and shakers or folks who could advance his career. Ruthlessly organized and
efficient, he was a top corporate lawyer at a premier firm in Seattle. Seeing his pre-teen scrawl
should have made him smile at his young self. Instead, somehow that naive list of unaccomplished
dreams pulled at him.

His mom never should have sent him his list of dreamy-eyed ideals along with the birthday card
she’d hand made with pressed flowers and a reminder to come home for the weekend to celebrate
his milestone birthday.

Evan strode across the marble lobby leading to his law firm’s offices like a man in a hurry. In

fact, he had ten minutes to spare before his next client meeting. A lot of people might use those
minutes to grab a coffee, chat with a colleague or relax. Evan used his elevator ride to read a
priority email; the time spent walking from the elevator to his office to consider his client’s
question. By the time he hit his office, he was task-ready and sat down at his computer to email
back his advice.

Even as he worked, in the back of his mind he realized that his big birthday was almost here and
he wasn’t anywhere near where he’d planned to be when he was a pre-teen. Okay, he was a
millionaire, but that was exactly the sort of lame goal a twelve-year-old would consider important.
But lists were important to Evan. And the fact that his mother, Daphne, had sent him that old
one, as though it were a thing to be prized, bothered him.

Not that a hint of his thoughts showed on his face when he walked into The Rainier Room, one
of the smaller meeting rooms. Half a dozen worried-looking executives were settling themselves
around a mahogany conference table while Martha, Evan’s assistant, poured coffees and sparkling
waters. Evan introduced himself and shook hands all around.

These five men and one woman were here seeking legal ways to raid their company’s pension
plan. He had utter contempt for the naked greed of the president and vice presidents sitting in front
of him in their hand-made suits and year round suntans hoping they could bail their asses out of the
financial jam their fat paychecks and ludicrous bonuses had got them into. However, nothing on his
face would give away his personal feelings. He was too good for that.

When the meeting ended, it was six o’clock. He returned to his office, typed up his own notes,
then he stared out his office window at the other lighted high rises in Seattle’s financial district
where he lived most of his life. In the distance he could see the harbor that led to the rest of the
world. He pulled out the list. It was a bucket list made before that term even existed.

EVAN’S AMAZING LIFE LIST
Make a million dollars before age 30.
Ride a motorcycle across the country
Kiss a girl in the rain
Run a marathon
Learn Spanish
Have sex with a woman!
Learn to play an instrument
Travel to India
Fly a plane
Scuba dive a ship wreck
Swim in every ocean
Swim with dolphins
Hike the Grand Canyon
Leave the world a better place than I found it

As if.
He picked up his phone and called his parents’ number. His mother answered. “Well, hello
darling,” she cried when he’d identified himself. He’d learned early that when there are eleven kids
in the family, you have to identify yourself on the phone or risk insane time-wasting conversations.
In the background he could hear rhythmic thudding that made his heart pretty much sink. “What’s
that noise, Mom?”