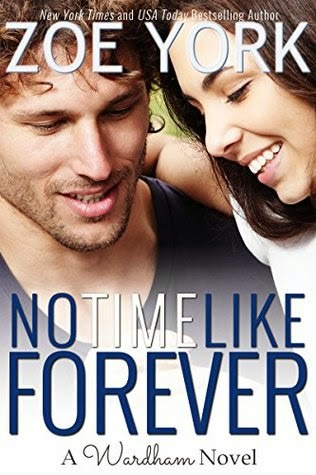 Wardham #4
Mari is a bartender in Wardham. Chase Miller has come home to recuperate from a bad car accident. He has been hanging out in the bar during the day. One day her ex-boyfriend was bothering her, not getting the message that she was through with him. Chase pretended to be her new boyfriend and gave her a smoking hot kiss to prove it. Mari keeps thinking about the kiss but knows that Chase is off limits. Chase keeps thinking about the kiss and he wants more - but not too much more.

He tells his mother that he needs to find his own place know that he is able to take care of himself. She looks hurt but he tells her that he seeing someone. She is thrilled. Chase then asks Mari to be his pretend girlfriend. She says yes but no sex will be involved.

Chase has to go back to Phoenix to take care of some business and to participate in a charity golf tournament. He asks Mari to go with him. They have a fantastic time together but when they get home, Mari puts the brakes on. Chase doesn't like it. He is really starting to like her and how he feels when he is with her. Will they get it together?

It started with a kiss…
Mari Beadie needed a boyfriend, and former NHL hockey star Chase Miller happened to be in the right place at the right time. The kiss that followed wasn’t necessary, strictly speaking, but it sure was hot.
Hot enough that when the tables are turned, Chase knows just the pretty bartender to ask to be his pretend girlfriend. Only this time, it’s not a one-time deal.
Excerpt:
MARI Beadie used to love bartending weekday shifts at Danny’s, Wardham’s only pub. She could write lyrics between the lunch rush and the after dinner rush, and the night usually wrapped up relatively early.
That enjoyment had shifted to the past tense thanks to the far too regular—and far too grumpy—occupation of the barstool furthest from the door by Wardham’s prodigal son, Chase Miller.
For one thing, there was no way she could write in front of him. For another, he attracted fans. And they weren’t pint-buying fans either. Often they weren’t even of legal drinking age.
But right now, she’d give her eyeteeth for Mr. Grumpy Pants to be in his seat at the end of the bar. So of course he was missing, probably out back taking yet another call from his girlfriend. He’d been getting lengthy calls from her a couple of times a week lately. Mari had finally put her foot down and insisted he take those calls outside when the pub was otherwise nice and quiet. She didn’t need to hear all of his private business.
That was a stupid rule to enforce, because now it left her alone with her ex-boyfriend, Joel, who really didn’t understand that they’d broken up.
He leaned over the bar, his floppy dark hair landing heavily in his eyes. She wanted to yell at him to get a haircut, but he’d just twist that into evidence that she cared.
Which she didn’t. At all. The man—more of a boy, really—was a useless waste of space who tricked women into thinking he was hot stuff because he had a nice voice and looked good holding an electric guitar on stage.
He certainly didn’t play the guitar. She might have been able to forgive the stupid haircut if he could play.
“Hey, baby girl,” he crooned at her. His smile was lazy and knowing. Except he didn’t know—that she hated that endearment with the passion of a thousand suns, for example. Or that she worked her butt off to support herself as a musician, and there was no way she’d date anyone who took the easy way out and lived at home so he could concentrate on his art. Particularly when his art seemed exclusively devoted to getting laid and looking hot.
Read more here.
ebook, 236 pages
Published October 21st 2014 by ZoYo Press
By jmisgro at January 12, 2015