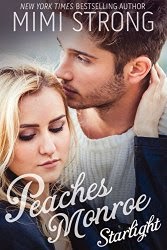 Peaches Monroe #2
Peaches goes to LA to model for an underwear shoot. Her heart is broken by Dalton Deangelo. But the guy she is modeling with is really cute. His name is Keith. She likes him. He likes her. She goes home with him, mainly because she has no where else to go because she refuses to go back to Dalton's house after she found out he was only seeing her for research for the movie and using movie lines on her.
Peaches has decided to stay with Keith until she has to go back to Washington. He is very nice to her and acts like he really cares for her. She has to go to Dalton's and get the rest of her things. He wasn't very nice, trying to convince her he really did care about her. But does he?
Things start to go downhill for Peaches and she hooks up with her friend Mitchell and they go clubbing a few times. Which man will she end up with??

I liked this story but I was a little bored with it.

So, I fly off to LA for the big Peaches Monroe (that's me) underwear campaign shoot.

I'm nursing a bruised heart from everybody's favorite TV vampire, Dalton Deangelo, when along comes this new batch of trouble. Keith Raven. Sexy, tanned, and nearly naked. He's my new co-model, and let me tell you, Keith is the full package. Other girls fantasize over his sexy calendars for a reason. The best/worst part is he takes his time when he touches me, which drives me absolutely crazy.

My new bestie Mitchell warns me that all male models are walking disasters, but I can't control myself around Keith.

To mess with my head, Dalton Deangelo is trying to redeem himself and win me back. He sucks at redemption, but he has a special sense for danger, and always shows up when I need to be rescued. Now I've got two insanely hot guys fighting over me, and I'm headed for disaster.

Somebody please stop me, because if I keep slamming my heart like this, it's going to break.

Sounds interesting lol Wonder who she ends up with!?