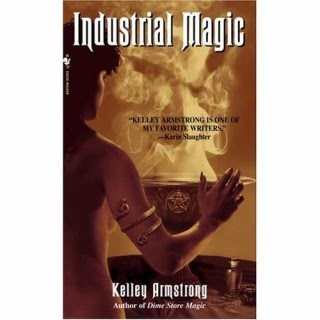 Women of the Otherworld #4

Paige and Lucas take a case involving Cabal children getting murdered. They go to Miami and get help from Lucas's father, Benicio Cortez. The last victim is in a coma so Lucas arranges for Jaime Vegas to help Paige while he flies back to Chicago to finish a trial. Jaime and Paige start to figure some things out and Lucas ends up calling Clay and Elena to take Savannah because they are worried that she may be kidnapped because of her connection to a cabal. His father wants to help but they are afraid that his protection will keep Savannah from Paige and Lucas. Benicio is a scary man.

Jaime has a spirit after her and this leads them to involve some vampires. Will all these supernaturals figure out who is harming these kids and why?

I really enjoyed this story. I liked how everybody was in on this caper. The mystery involving who was the murderer was very interesting.

Think your in-laws are scary? Try meeting Paige Winterbourne’s potential father-in-law: CEO of the Cortez Cabal, a multinational corporation…and the supernatural equivalent of the Mafia. Lucas Cortez has devoted his life to ruining the Cabals, though that doesn’t stop his father from expecting him to take over the family business someday. Benicio’s favorite ploy is to appeal to Lucas’s quixotic ideals by asking him to investigate Cabal cases of injustice.

After years of failure, Benicio finally has the perfect case: a teenage witch attacked and left for dead. Refusing will be difficult enough for Lucas…near impossible for his new witch girlfriend. Paige and Lucas soon discover that the young witch wasn’t the first Cabal teenager attacked.

When the infighting among the Cabals threatens to let the killer continue his spree, Paige and Lucas decide it’s up to them to stop him. The chase takes them on a cross-country hunt through the supernatural world, where allies can be found in the strangest places, including a celebrity necromancer, a wise-cracking Celtic deity, a pissed-off ghost, a half-mad clairvoyant, and a group of vampires who’d really rather be in an Anne Rice novel.

I sat in a hotel room, across from two thirty-something witches in business suits, listening as they said all the right things. All the polite things. How they'd heard such wonderful accounts of my mother. How horrified they'd been to learn of her murder. How delighted they were to see that I was doing well despite my break with the Coven.

All this they said, smiling with just the right mixture of sadness, commiseration and support. Wendy Aiken did most of the talking. While she did, her younger sister Julie's eyes darted to where Savannah, my thirteen-year-old ward, perched on the bed. I caught the looks Julie shot her, distaste mingled with fear. A black witch's daughter, in their hotel room.

As Wendy's lips moved in rehearsed platitudes, her gaze slipped past me to the clock. I knew then that I would fail . . . again. But I gave my spiel anyway. I told them my vision of a new Coven for the technological age, linked by sisterhood instead of proximity, each witch living where she chooses, but with a full Coven support system only a phone call or E-mail away.

When I finished, the sisters looked at each another.

I continued. "As I mentioned, there's also the grimoires. Third-level spells, lost for generations. I have them and I want to share them, to return witches to their former glory." To me, these books were my trump card. Even if you didn't give a damn about sisterhood or support, surely you'd want this power. What witch wouldn't? Yet, as I looked at Wendy and Julie, I saw my words wash right over them, as if I was offering a free set of steak knives with the purchase of a complete living-room suite.

"You're a very compelling saleswoman," Wendy said with a smile.

"But we must admit, we have a problem with the . . . present company you keep."

Julie's gaze slid toward Savannah. I tensed, ready to leap to her defense.