One Night of Sin by Elle Kennedy 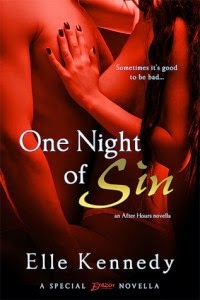 After Hours #1
Skyler wants to be bad with Gage. He wants her as much but says it will only be sex. She agrees but they start to spend more and more time together doing other things besides sex. She watches him fight in the cage matches because he had to do it to bail his brother out of a jam. But when the promoter doesn't want to let him go something bad happens. Gage pushed Skyler away enough he loves her. She lets him but also helps him in a way he doesn't know about. Will that make him change his mind?

I loved this book. I will be reading more in this series. It's funny how men always say they don't want relationships but are the first to fall!

When it comes to sex, good girl Skyler Thompson always plays it safe, choosing stable and sedate over wild and thrilling. She doesn’t do one-night-stands, but one look at sinfully sexy Gage Holt and she’s willing to reconsider. He makes her want to be bad for once in her life, and she’s prepared to take what she wants.
Danger follows former MMA fighter Gage Holt like a shadow. Despite his successes as part owner of Sin, an exclusive nightclub in Boston, Gage can’t risk getting involved with a woman, especially one as sweet as Skyler. Still, he can’t resist a taste—and it’s so damn good he has to see her again.
As addicted as he is to her, Gage knows there’s no future for him and Skyler—not with his past lurking in the dark corners of an MMA cage. But Skyler’s tougher than she looks, and she’s ready to fight for her man.

She was staring at him again.

Gage felt those big blue eyes burning a hole in his back, and when he turned around, there she was. Still seated in the velvet booth across the room, half listening to her male companion while her curious gaze remained focused on another man. On him.

It had been two years since the club’s grand opening, which meant two years’ worth of shifts, but Gage could honestly say this was the first time he’d gotten hard on the job. Although beautiful women poured into Sin on a nightly basis, not one had ever triggered such a visceral response in him.

Forget about it. Too young, too sweet, and too out of your league.

Yup, the cynical voice in his head was right on the money. Little black dress and f**k-me red heels aside, the brunette in the booth exuded a good-girl vibe that almost made him feel guilty for checking her out. A man like him would corrupt her in a heartbeat. Taint her. Lead her down a path of damnation to a wicked place where girls like her didn’t belong.

And bad idea, thinking about all the wicked things they could do together, not when he was already semi-erect. Now there was nothing semi about it—his c**k was at full salute and pushing against his fly.

Gritting his teeth, he turned away and swept his gaze over the VIP lounge. It was crowded tonight, more than usual for a Thursday, but things had been tame so far. Granted, it was only midnight. In his experience, Asshole Hour didn’t start until closer to 1:00 a.m., after too much booze or drugs or sexual tension tipped a customer’s conduct scale from harmlessly wild to dangerously stupid. As head of security, Gage was tasked with making sure that didn’t happen—or stepping in if it did.

He edged toward the railing and studied the cavernous main room ten feet below. The dance floor was packed, every table and booth occupied, and the intermittent strobe lighting illuminated a sea of flushed, euphoric faces. Gage spotted several couples making out in the shadows, and those who weren’t into PDA were probably getting into all sorts of trouble in the curtained alcoves situated throughout the club. Sin always drew a wild crowd—folks of all ages flocked to the club for a night of boozing, dancing, and even screwing if they didn’t make a spectacle out of it. Everything on the floor looked fine, and Gage knew his bouncers would notify him over the comm if that changed. For now, no problems seemed to be brewing in the air.

“BMOC over there just asked if we offer party favors.” Carla sidled up to Gage, her red-painted lips close to his ear as she gave him the heads-up.

His eyes narrowed at the pretty waitress. “What kind of party favors? And which big man on campus are we talking about?”

“I’m pretty sure he’s looking for p***y. The expensive kind.” The blonde gave a discreet tilt of the head. Right in the direction of the back booth.

Gage turned, expecting his gaze to collide with a pair of hungry blue eyes, but the brunette was gone. Only her date remained, tapping his fingers on the tabletop, a smug look pasted on his chiseled face. The kid couldn’t have been older than twenty-two or twenty-three, but he exuded an air of entitlement that was impossible to miss. He was a Very Important Person, at least in his own eyes.

The younger guy’s dark eyes were checking out every woman in the lounge. He made no attempt to hide it, either, as if it was his right to leer.

Gage felt vindicated by the knowledge that the kid’s beautiful date had ditched him.

“Tell him we don’t sell skin here,” he said coolly. “If he can’t find a girl who’ll f**k him for free, he can go out on the street corner like any other john.”

Man, he really hated some of the clientele that frequented Sin. Every night he encountered at least one rich, pretentious ass who thought the world owed him something. Case in point—this smug-faced creep inquiring about procuring the services of a whore.

As part owner, Gage supposed he had the right to throw the guy out, but Reed and AJ would tear him a new one if they found out he was sending away big spenders.

And big spender, indeed. Gage glanced back in time to see Carla delivering a six-hundred-dollar bottle of whiskey to the table. And the douche bag was now making eyes at the cute, not-a-prostitute redhead seated at the VIP bar. Good. She ought to occupy him for a while.

Gage touched his earpiece. “Yo, Jesse, get up here and take over. Gonna pop out for a cigarette.”

The bouncer’s baritone voice crackled in his ear. “Got it, boss.”

He waited until he spotted Jesse’s close-cropped head weaving through the crowd. In between flashes of strobe, Gage saw the crowd part without delay for the muscular man, which made him smile. He’d handpicked all the bouncers himself, with only two required traits in the hiring process: reliable and intimidating as f**k. Jesse fit both of those to a T.

As the other bouncer ascended the steps up to the lounge, Gage headed for the emergency exit on the other side of the room. He strode down the narrow staircase, emerging a moment later in the alley behind the building.

He rummaged in his pocket for his e-cigarette, lifted his head—and froze.

His blue-eyed angel sat eight feet away. Slender body up on the wooden crate next to the staff door, chestnut-brown hair falling over one shoulder, dress riding up her thighs to reveal long, silky legs.

He sucked in a breath. Lord, she was even more appealing up close.