When They Weren’t Looking by Zoe York 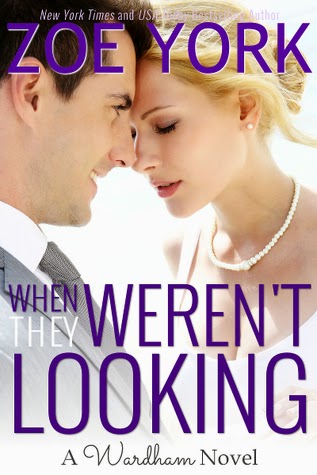 Wardham #3
Evie needs some time for herself, so her mom gave her a weekend away from the boys. She's been divorced for two years.  She needs to feel like a woman again. She meets a handsome man in a bar and goes out with him for karaoke. He invites her to his home afterward. They have a night of passion! Then she goes home to Wardham.
What she doesn't know is Liam knows who she is. He's seen her while he visits his uncle who's farm is across the road from her mom's farm. Liam has had enough of the city life. He doesn't like the rat race anymore so he quits his job and heads to Wardham to work on the farm with his uncle a couple of months later. He goes looking for Evie, who has just found out that she is pregnant. All she knows about Liam is his name.
Evie is happy and sad when Liam comes into her studio. She tells him the news and is surprised that he is happy. He already loves her but doesn't tell her. He asks her to marry him but she says no. She will let him be part of the baby's life but she doesn't need him for anything else.

How long will it take him to convince her that they belong together?

I felt so bad for Liam in this story. He wanted a happy ever after ending but he really had to work for it!

She’s not looking for love…A girl can have just one night of fun, right? After years in a spirit-breaking former marriage, Evie needed to get her groove back. Cutting loose in the big city with no strings attached—no matter how cute her one night stand guy might be. Besides, she’ll never see him again once she goes home to Wardham.
…He’s not thinking about forever.Liam knows showing up on her doorstep might throw Evie for a loop. But Wardham’s his new home now, and he just can’t get the sexy single mother out of his mind. A second date isn’t to much to ask, is it? Or a third, and a fourth!
It’s not what they expected. But it might turn out to be just what they need.Life has a funny way of throwing curveballs, though. Just when things are finally going right for Evie, two little lines on a pregnancy test change everything. Now she’s running scared, and Liam has to pull out all the stops to prove a family with her is everything he’s ever wanted.

Excerpt:
The only thing that would make Evie Calhoun’s weekend away in the city better would be an orgasm or two. In an ideal world, served up on a platter by a pool boy or a lumberjack.But even though that wasn’t going to happen, she couldn’t keep a smile off her face. Walking back to her hotel after a world-class dance performance, a gorgeous lake on one side of her and the late summer sun, setting to the west behind her, lighting up the glasss towers of Toronto’s central business district on the other.
What an exciting place to call home.
Evie never would, of course, but she could pretend for a night or two. Her mother had surprised her with a much needed weekend away. Away from Wardham, and her ex-husband, and even her much-loved life with her boys.
Claire Calhoun had given her daughter a train ticket to the city and five hundred dollars, with an order that none of that was to be spent on anything even remotely like a bill or clothes for the kids. Evie was to spoil herself.
And she had: conveyor-belt sushi for dinner the night before, a gorgeous room at the Westin Harbour Castle hotel, a few splurges at Sephora this afternoon, and now she was heading back to her room after a breathtaking performance by a dance troupe at the Harbourfront Centre.
In another life, Evie might have moved to the city and auditioned for similar companies. Shared a flat uptown with three other girls and bartended all night so she’d be free to dance during the day. But she’d been scared of the odds against her, and her few visits to the city to see Evan had left her underwhelmed. Loud, expensive, dirty. Wardham, with its sleepy beach and zero competition was the more comfortable choice.
And she wouldn’t do it any differently, given the chance, because whatever other costs her choices had, she had two beautiful sons who made her world right. Her family, for all the bumps and bruises it had sustained over the last two years, was a wonderful unit. Connor was rapidly turning into a young man, careful and studious, but always staying on the cute side of bossy. Max, two years younger, had finally figured out how to stick a punch-line and used it to maximum advantage in his natural calling as an entertainer. His teacher danced around the term class clown, but grade one had been a hard transition for him, and she expected more of the same in the fall.
But Evie…somewhere in the mix, she’d let herself be compressed to mother, community member, daughter, sister. All good, but all giving. This was the first time in years she’d allowed herself to indulge in something selfish. Sleeping in, shopping, dance. She’d joked with her girlfriends about adding some sex into the mix, but the closest to that she was going to get this weekend was being able to spread out on the hotel bed and read an erotic romance novel without worrying about hiding it from prying eyes.
Sex.
It had been so long, she might actually have forgotten how to do it.