Where Their Hearts Collide by Zoe York 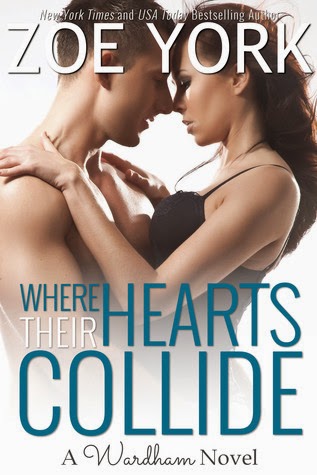 Wardham #2
Karen felt out of place in grad school so she left. Then her parents decided that she could take over their grocery store as manager and they bought an RV and took off. That was 12 years ago. Wardham is going to build a new library and she wants to be the librarian but she needs a masters degree. She feels stuck in her life.
Paul, Karen's new neighbor, starting over in his life. He got out of the city and bought a house with a backyard. He is trying to be a better man and father to his daughter Megan. He is attracted to Karen and wants to date her but she says she doesn't want a relationship because she will be leaving for a year to finish school.
Paul wants her and he will wait as long as it takes. He needs to convince Karen. Will she listen?

Karen’s finally decided what she wants to do when she grows up. Too bad it’ll mean leaving behind her new neighbour, who’s stirred up a different kind of grown up feelings. But when he rebuffs her attempt to have a fling before she leaves Wardham, Karen  knows its for the best. A clean break, no messy emotional entanglements.
Intense and private, Paul has recently moved to Wardham for a more family friendly job, leaving behind a career as a homicide detective in the city. He only has his ten year old daughter a few nights a week, and he doesn’t want any distractions or drama while he tries to repair their relationship.
But Karen is right next door, and everywhere he goes. His resolve to keep his distance only lasts until she needs a true friend in her corner, and he realizes he can’t imagine life without her.

Karen grabbed a bag of all-purpose flour, and strode away, swiping baking powder and a bag of chocolate chips as well. She dumped the supplies on the conveyor belt at the first checkout, then headed for the dairy section. “Need eggs?” She tossed the question over her shoulder, but didn’t wait for a response. She needed a minute to compose herself. This reaction was bizarre. She’d only had one conversation with the man. Sure, she’d observed him in a creepy stalker fashion for weeks, but they barely knew each other. She’d gotten carried away with some romantic fantasy of the good-looking cop next door.

“Megan says we need milk.” Paul stepped up beside her. Karen looked around. “She got sucked into your magazine display.”

“The milk. We’ll need it once the cookies are cool.” He grinned. “Or so I’ve been instructed.”
Good lord, that smile could light up a room.

“It’s a classic combination,” she breathed, kicking herself as the words came out sounding funny. He must have heard the warble too, because his gaze dropped to her mouth and lingered for a moment. “What kind do you want?”

He flicked his gaze back to her eyes and blinked. “1%, I guess.”

“It’s behind the last door there.”

He brushed past, close enough for her skin to prickle, but not quite making physical contact, and she sucked in a breath. He paused, because how could he not have heard it, but then he opened the cooler and pulled out a bag of milk.

They stood for a minute, her with the eggs, him with the milk, and then he smiled again, but this time it seemed wistful. “You’re an interesting neighbour to have, Karen.”

“Thanks, I guess.” Her lips curled up of their own volition. “You’re unlike any neighbour I’ve ever had.”

“I came to Wardham for peace and quiet, you know.”

She couldn’t contain her surprise. “You think I’m a troublemaker?”

He grinned. “I’m quite certain you are.”

“And you don’t like trouble.” It spilled out before she could filter the words into something less pleading. “I mean—”

“I have a professional interest in avoiding it.” He interrupted her, but his tone wasn’t rude. It was warm and low and full of…heat? He stepped closer. “On a personal level, I have a history of liking trouble more than I should.”

Oh, shit. “I’ve never been trouble before,” she whispered.

His knuckles brushed hers. Milk, eggs and a boatload of issues apparently stood between them, but at that moment, all she could feel were the hard, hot points of contact as the back of his hand pressed into her skin.