Tangled Past by Leah Braemel 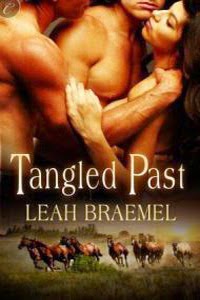 Sarah's "father' sold her horse and some cattle to some men, Jackson and Nate. She is angry. He is a bad man. She overhears her brother, father and a ranch hand speaking about attacking the men and getting the horse and cattle back. She sneaks out to the barn and intends on telling the men what she heard but she catches them together. The creepy ranch hand tells her father that he saw Sarah go out to the barn. He catches them - thinking that Sarah is having relations with both men. He marries her off to Jackson. Before they leave she tells Jackson and Nate what she heard. They arrange for the Rangers to catch them.

Jackson thinks Sarah is pretty and doesn't mind being married to her. He knows that he cannot continue his relationship with Nate now that he is a married man. But they live with Nate until they can afford to get a place. Nate loves how his house is now a home with Sarah living there. Jackson and Sarah get a long very well until Nate gets hurt and almost dies. Jackson pleads with Nate not to die and stay with him.

Will Sarah leave the men so they can be together? What happens when her father is caught?

I really liked this story. Sarah is an unusual woman.

Forced to marry a man she just met, Sarah McLeod clings to the hope that she’ll finally find the love and acceptance she’s always craved. But her tenuous dreams of a happy life on the frontier are in danger of being dashed by the one thing she can’t change—her husband’s love for another man.
Jackson Kellar’s determined to do right by his bride, yet he’s torn between his newfound love for Sarah and his still-burning desire for Nate.
Ranch owner Nate Campbell loves them both. He hates to see Jackson’s loyalties so divided, and doesn’t want Sarah hurt either. But how can they fix the tangled mess they find themselves in? Nate suggests a possible solution – a permanent threesome.
With the open frontier closing in around them, is Nate’s solution their path to happiness? Or will others destroy what they’ve found together?
Read a preview here.