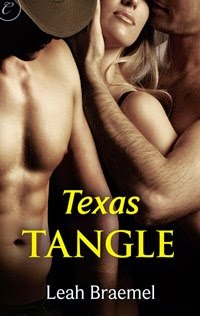 Tangled #1
Nikki is almost home from rescuing a horse. She has been driving for hours and her truck breaks down. No one will stop to help. She's just about given up when Dillon sees her and stops. She has always had a thing for Dillon. But he never asked her out and she ended up marrying a divorcing someone else. She has had some bad times. He calls for a tow truck and takes her and the horse home only to find that her crappy brother stole everything she had and took off. He even took her clothes.

Dillon takes her home and gets what he always wanted - her. There's a good story there. But his foster brother is also staying at his house. Brett has a thing for Nikki too. He's a cop and would sometimes get called to the house when her husband was acting out. He would check on her after the divorce but never let her know that he was interested. Nikki always liked Brett too.
Now she must choose.....

Thanks to her cheating ex-husband and her thieving brother, all horse breeder Nikki Kimball has left is a bruised heart, an over-drawn bank account and an empty home. When sex-on-legs Dillon Barnett and his brooding foster-brother Brett Anderson start showing more than just neighborly attention, Nikki is intrigued…and a little gun-shy.
Dillon and Brett have a history; back in high school, the two friends fought a bitter battle over Nikki. Now, ten years later, Brett still longs to be the man in Nikki’s life, but he’s determined to stand back and let Dillon win Nikki’s heart.
Society says Nikki must choose between the two men she loves. Is Nikki strong enough to break all the rules in order to find happiness?
Excerpt:

Chapter One
No, no, no!” With steam billowing from the hood of her truck, Nikki maneuvered blindly easing the vehicle to the side of the road, making sure the horse trailer she was towing wasn’t blocking traffic. “You can’t die here. We’re so close to home.”
With a sigh, she killed the engine, climbed from the cab and kicked the front tire. “You couldn’t have held on for another three miles, could you? No-o-o, you had to blow out the rad here, you piece of shit.”
She waited in the inky black night for ten minutes before a vehicle crested the hill, its high beams blinding her until the driver dimmed the lights. She moved to the side as the Jeep zipped past, not even slowing to see if she needed help. A half-dozen cars zoomed by over the next half hour without a single one slowing. She was starting to consider unloading her newest horse and riding him home when a familiar white pick-up slowed then parked in front of her truck.
First a long, booted leg, then the rest of the driver’s body unfolded as he clambered down. Dillon Barnett jammed a dusty black cowboy hat on his head before he ambled over. “Hey, Nik. Need some help?”
“Yeah, my truck’s overheated.” Trying to ignore the shivery feeling that had her nipples hardening every time she set eyes on her neighbor, Nikki reached for the hood release.
Dillon caught her wrist and stopped her. “Whoa, don’t touch that yet. Let it cool down a while longer, or I’ll be hauling you off to the burn unit.”
Before she could stop herself, she leaned in and filled her lungs with his scent, detecting only a hint of the aftershave he’d used that morning behind a heaping of good honest sweat. Mostly he smelled of machine oil, sawdust and…mesquite? She scrunched up her nose and took another sniff. “You been at a barbecue?”
Dillon chuckled, a dark delicious sound that reminded her of humid summer evenings eating barbecued ribs and drinking cool beer. Of star-filled nights that promised long sessions of hot, sweaty sex.

Where had that come from? Maybe because she hadn’t been with a guy and had hot, sweaty sex in a couple of years?
“We’ve been cuttin’ down some mesquites out back of the old Pritchert place. New owners are plannin’ on putting in a pool and hired me to do the landscaping around it. I figured I might as well get started in there with my machinery.”
When he released her, she took a step back, stopping her sigh before it could escape. Stop with the fantasies, Nik. If Dillon was interested in you, he’d have made some move after Wade moved out. Oh, he was always over checking on her, helping her fix the fences the horses or weather knocked down, but not once had he given her any indication he was interested in her.
No, Dillon just did those things because he’d been raised to be a good neighbor, willing to help the struggling divorcee with the measly forty acres of scrub behind his spread of two hundred and fifty. Still, a girl could fantasize. Oh. My. The fantasies she’d been having about him lately.
But had she imagined the way he’d held her after pulling her against him? Or the way his hand stroked the small of her back? That couldn’t have been accidental. Could it?
Read more here.