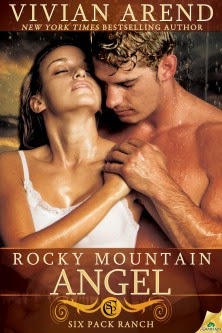 Six Pack Ranch #4
Allison finds out that her mother is dying so she goes to Gabe and asks him to pretend they are a couple so she can come home and be with her mom. Gabe says yes. In return, she will help him turn the ranch into an organic operation. He likes Allison. But they really start falling for each other. He is there for her and vice versa. They are good people that always help others.  Will they be able to help each other?

I enjoyed this one. Gabe's father was a piece of work. He'd been verbally abusing him for years. Being with Allison gave Gabe the strength to fight back against his dad. Gabe was there for Allison and her mother during the time Maisie was dying. Sweet story.

Sometimes even Angels must learn to fly…
Allison Parker needs a convincing excuse to come home to Rocky Mountain House. A hopelessly romantic reason that won’t let her mother suspect the truth—that Allison has discovered Mom is keeping a terrible secret from the family.
Gabe Coleman is struggling with two of the roughest parts of ranching: dealing with his bull-headed mule of a father, and making enough to pay the bills. When his old friend Allison offers to help him develop his ideas for organic ranching—in trade for pretending to be her fiancé—it sounds like the perfect set-up.
Yet the deception leads them in an unexpected direction, where their shared daily hells are erased by nights of heavenly distraction. It’s not supposed to be real, but once the gates are opened, there’s no denying they’ve found in each other a little bit of Paradise.
To break free of the past and face the future, though, will take more than temporary pleasures. It’ll take putting their hearts on the line.
Warning: Tortured hero with a guardian-angel complex, grief-stricken heroine willing to sacrifice everything for family. Break out the tissues, this trip to the ranch is a heartbreaker on the way to the HEA.

Chapter One
Neither of them blinked.
Dust motes hovered in the sun streaming through the open barn door. Gabe Coleman leaned back on a wall and took a deep breath. The heavy scent of farm animals filled his nostrils. Familiar as it was pungent, the aroma that had been a part of his entire thirty-one years calmed his nerves.
The conversation was going about as well as he’d expected, but damn if he’d give up yet. He resisted muttering stubborn jackass and scrambled for a new tack. “Look, I showed you the receipts for the past year. Expenses went up, our projected revenues are still far less than they need to be.”
The face before him remained motionless. Shit. Definitely not working.
Another idea struck. “I read an article in the Calgary Herald last week. Rancher down by Pincher Creek was ready to go bankrupt…”
Gabe trailed off. Suggesting their section of the Coleman ranch was getting closer to that same situation was not the way to make his father listen to reason.
Three feet across from him, broad nostrils twitched for a second then the ancient donkey reached down to grab a mouthful of grain before turning his back on Gabe.
Even the animals seemed tired of listening to him try to come up with a way to save their lives.
He pushed himself up and headed toward the tack room. If nothing else, the ranch itself provided a million distractions. The reality of working the land sucked—enough damn property to make a man look rich, and not enough money coming in to keep putting food on the table throughout the year.
Giving up wasn’t an option, but hell if he knew what was at this point.
The saddle had barely landed on Hurricane’s back before his mother’s voice carried from the house side of the yard.
“You got any spare time today?”
Gabe tossed her a smile even as he wondered why she hadn’t made her request to his father. “Was going to go check the creek and fence lines, but there’s no rush. You need a hand with something?”
She nodded. “I want to plant the garden this week and need more room. Can you turn over another few rows?”
Shit. Now he knew why she’d waited until Ben had headed into town after breakfast. “Ma, you already have enough garden you can barely keep up. You sure you want more to deal with?”
Dana Coleman looked her age that day, but the determined jut of her chin warned him he’d be breaking sod before long. They came by stubbornness honestly in their family, from both his parents’ sides.
“Every bit we grow is less we buy, Gabriel. And I figured a little extra wouldn’t go amiss—there are always people who want fresh produce.”
They stared at each other for a minute. Gabe hated the entire situation with a red-hot passion. He had ideas he thought could improve their circumstances, but beyond ideas were only half-started and hidden projects, none of which were going to bail them out of trouble. Using the donkey to practice talking about finances was supposed to make talking to his family easier, but hell if he wanted his ma to be the one worrying. “You can’t save the ranch by growing more carrots.”
“Well, I can’t save it sitting and complaining that the cost of feed keeps going up either, can I?” She snapped her mouth shut and glanced out over the fields as Gabe hid his surprise. She never, ever complained about the way Ben ran things, and the small slip stunned him.